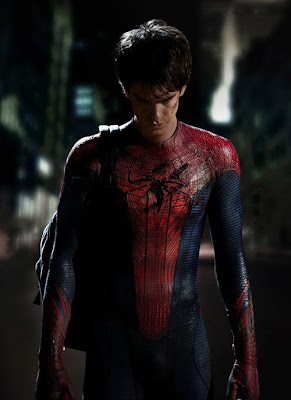 It's unfair to judge a movie before you see it, but I do this routinely based on gut instinct. I haven't seen THE SPIRIT but it looked godawful (and far from "the spirit" of Will Eisner's comics).
Similarly, I kept calling THE GREEN HORNET "THE SPIRIT 2" and that one has been trashed by the critics and now it looks like its underperforming at the box office. I don't know, call me crazy, but I think the director (an arthouse specialist) and star (a mildly funny, overweight, Semitic-looking comic actor) were wildly miscast on this project, given the blockbuster action scale and WASPy source character.
It's kind of like Vince Chase on ENTOURAGE who is constantly dropping in and out of the AQUAMAN movie. I'm sure half the joke is that he looks nothing remotely like Aquaman (sorry, nerds, "Arthur Curry").
So what of the upcoming stuff like THOR, CAPTAIN AMERICA, the SPIDEY reboot?
THOR
Well, here are my gut reactions. THOR looks miserable. They've got Anthony Hopkins playing his rote patriarch character for the umpteenth time to the point where they're starting to blur (see BEOWULFMAN for others). They ditched the entire Dr. Don Blake in Manhattan stuff from the comics and shoehorned a big blond guy into a HULK style movie with New Mexico, government and military people trying to stop him, that doesn't feel like a Norse THOR yarn (a friend pointed out that they've got some kind of multicultural, politically correct casting going on in land of the Norse gods Asgard). Even the posters look weak. So do the computer-ish effects in the trailer. As far as I'm concerned, there's no way I want to pay to see that on the big screen. They moved too far away from the Lee/Kirby concepts. I don't like the Thor character that much to begin with so this really clinches it. It's no coincidence, I'll bet, that they dropped THE MIGHTY from the title. 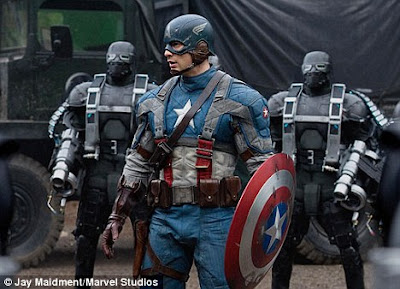 CAPTAIN AMERICA
Here's the first look of Chris Evans in costume. HEY, COOL! THEY GOT THE SHIELD RIGHT! Actually, I'm on the fence about how I feel about this movie. I love the character and comics and just about every major artist who ever worked on the CAPTAIN AMERICA comic. I really WANT to love this film. I guess they have to try to ground the costume in reality (they always feel compelled to in Hollywood...at least the SPIDER-MAN movies got the costume right). This costume is not bad and not great. It borders a little on the Reb Brown CBS TV specials but I think I can live with it. Chris Evans and the Silver Surfer were the only things I enjoyed about those awful FANTASTIC FOUR movies, and I like director Joe Johnston's ROCKETEER and even WOLF-MAN so I guess I'll see this one in the theaters.
The new (and improved?) SPIDER-MAN with Andrew Garfield
They're already messin' with success by altering the Spider-Man costume with those little slashes on the sleeves. Even though the first trilogy was flawed, I love Sam Raimi as a director and I thought Tobey Maguire was pretty close to perfect in capturing that mix of teen vulnerability, angst and heroism. Andrew Garfield, a British actor, won me over as an actor with his performance in SOCIAL NETWORK. He can definitely act. But there's something about his (ethnic?) look and features that he just doesn't look like Peter Parker to me. And this Spider-Man costume looks like SPIDER-MAN BEYOND or something. It's also frustrating taht they're going back to the start and high school instead of continuing with more villains like The Lizard and Mysterio. I was originally bent on not seeing this one and I'm still on the fence about whether I want to see this one. It may actually depend on the buzz. If the buzz is bad, I'll wait till DVD. It's not a film that I want to run out and see opening weekend.
THE VERDICT: So far...I really want to see this one the most!
Posted by Greenblatt the Great! at 8:38 AM

In an ideal world, all these films would be a plethora of riches!

Imagine if we were 10 years old again..We'd be peeing our pants in excitement!

Still, overall, it's amazing how some of these superheroes have become THE tentpole franchises for the studios.

To think HOWARD THE DUCK got the ball rolling for Marvel 25 years ago! Waaugh!!!