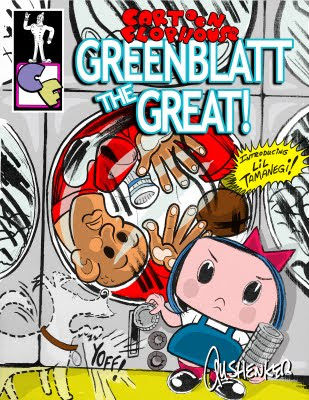 At long last, the final ish of my four GREENBLATT THE GREAT! comic book magazines will debut at APE (Alternative Press Expo '11) on Oct. 1 and 2 in San Francisco. It's CARTOON FLOPHOUSE FEATURING GREENBLATT THE GREAT! #4, folks.
Special thanks to my pal JOSE CABRERA of CRYING MACHO MAN fame who helped me with the technical execution of this cover design. Jose also applied his talents to the first issue of CARTOON FLOPHOUSE FEATURING GREENBLATT THE GREAT!
I'm also vying to have the complete GREENBLATT THE GREAT! collection in trade paperback form by the show.
And while some of the #4 strips will be in that collection, not all of them will. Namely, the main event of CF magazine #4: the saga of LI'L TAMANEGI, a devilish little Korean moppet who is something akin to Hello Kitty with dark edges. By the way, "Tamanegi" is the Japanese word for "onion face."
Expect other surprises in the mag as well, including our first ever Greenblatt the Great! letters page...(Oops! There goes one surprise...)
Here's all the skinny on APE. My table will be listed under CartoonFlophouse.com and I'll be elbow to elbow with my buddy Javier Hernandez of EL MUERTO AZTEC ZOMBIE notoriety, who will have HIS new book, an intriguing superhero/fantasy hybrid called THE COMA. (So don't sleep on our table, OK?).
I can't recommend the A.P.E. show enough. While Comic-Con is a great experience, as a convention itself, it's my favorite: about 6,000 people across two days at the Concourse who are interested in independent/alternative/art comics. No Hollywood hype, no dreary mainstream superhero shlock and video game noise, no lines and high costs and near impossible, year-in-advance scoring of badges....just talented cartoonists with terrific comics and graphic novels that push the medium's envelope. This year, old favorites Dan Clowes and Adrian Tomine and my acquaintance Shannon Wheeler are among the talents being special-guested at the show.
So drive on over unless you live in Andover.
See ya in San Francisco, Nabisco!
Posted by Greenblatt the Great! at 9:37 AM