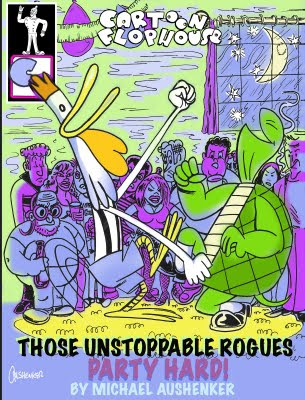 One of the cooler people I met at this year's San Diego Comic-Con was NOT Chris Evans or Kristen Stewart but LUIS CALDERON of PopCultureGeek.com -----who I'm proud to call an instant super-fan* (*definition: Cartoon Flophousers, or satisfied readers who return to buy the latest Cartoon Flophouse book.)

Luis not only informed me that he's a big fan of SILLY GOOSE (which he stumbled upon at th Comic Bug in Manhattan Beach, one of the best comic book shops in California)....but he purchased copies of every comic on the table and also included me in a film vignette on the indy creators at Comic-Con on PopCultureGeek.com that you can find right here. Check it out!
In the background of Calderon's interview with my table neighbor at the show, Jason Brubaker, another super-fan, Mr. Alex Acosta, who has made the CartoonFlophouse.com booth a regular Comic-Con destination, is seen receiving a signed and doodled copy of GREENBLATT THE GREAT! #3.
My longtime pal Javier Hernandez, the "El Muerto, Aztec Zombie" creator making his grand return to tabling this year, and new pal Blair Kitchen are also included in this Small Press round up. (Personally, I dig the '70s "Battlestar Galactica"-style font on some of the name titles. There's nothing like schlocky '70s sci-fi cheese...)
A big-up super-thanks to Luis Calderon, a reader of impeccable taste and class, for hyping us independent/alternative cartoonists. Man, we each need, like, 500,000 readers as enthusiastic and engaged in the humor comics stuff as Luis Calderon.
Since that's too much to ask for, right now, we've locked Blair up down in the lab dungeon until he finds a way of cloning Mr. Calderon. Stay tuned...
Posted by Greenblatt the Great! at 10:40 PM

The materials used to make utility sinks are generally more heavy duty such as stainless steel, cast iron or toughened plastic and they are made in sizes that will fit whatever space you have available. The more usual sizes might be single or double basins but it is also possible to get triple utility sink basins.