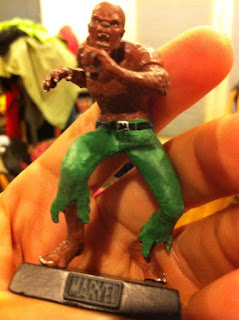 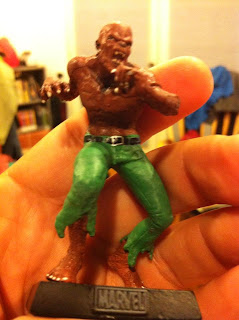 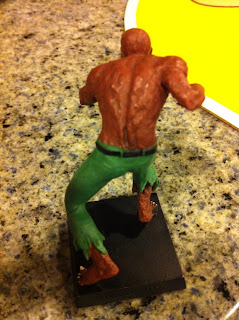 The tag's Jack with a Russell in front of it.
MARVEL FIGURINE COLLECTION magazine (the monthly mag that comes with the figurine), after quite a few years, is wrapping up in January 2013...but not without a bang. Issue #188 features a character I personally championed and lobbied for--WEREWOLF BY NIGHT--and editor John Tomlinson, who shares my love of Marvel horror (he edited some terrific issues of MFC devoted to Marvel horror heroes, including Tomb of Dracula and my first MFC issue as a writer, the Son of Satan, also digs the adventures of Jack Russell----as told by writer Doug Moench (personally, my favorite of all Bronze Age writers along with Steve Englehart) and artist Don Perlin, who has given us so many great moments in books such as  "Ghost Rider," "The Defenders," and "Team America." By the way, I have two articles in MFC #188 - a character history ("Life & Times") and "Behind the Scenes," which features highlights from my interviews with Moench and Perlin.
Moench and Perlin came aboard WEREWOLF BY NIGHT in the teens of the mag and stayed until its cancellation with #43 (the second of a two-parter guest-starring the Invincible Iron Man). Perlin's take on the character was delicious, his design of the Werewolf appropriately fierce and primitive, his storytelling clear and concise, while Moench really got into the first-person narrative stuff with a gusto that Steve Gerber exhibited on "The Macabre Man-Thing." Together, the duo created, as a villain, arguably in the top three characters to come out of '70s Marvel, Moon Knight (up there with Wolverine and the modern Ghost Rider). Moench/Perlin ran Moon Knight in #32-33 of WBN and also did a pair of Moon Knight issues in "Marvel Premiere." Then Moench took Moon Knight to further heights in the character's own series, drawn by Bill Sienkiewicz, who cut his teeth on that book and even brought back the Werewolf in the early 30s issues of MOON KNIGHT. Classic stuff!

WEREWOLF BY NIGHT - A great Bronze Age series that you can find in two editions of "Essential Werewolf By Night," the second part being pure Moench/Perlin. Highly recommended!
*****

I am so proud to be affiliated with MARVEL FIGURINE COLLECTION and damn double proud to have worked on my stories with as fantastic an editor as Eaglemoss' John Tomlinson. What makes him a fantastic editor, by the way, is that not only does he know how to edit, but he's a fantastic person (Unfortunately, that second part is often missing from many other editors I've worked with, so I really appreciate John's professionalism). With a good vision, great humor, and definitely bottomless patience, he has assisted me in bringing the best out of my articles. We've had some very fun collaborations on issues spotlighting such characters as the Beetle, James Jonah Jameson, Tiger Shark, Triton of the Inhumans, Silver Sable and now, the Werewolf. John has done excellent work editing the articles and laying them out with some glorious old school and new school visuals. Of course, any faithful reader of MARVEL FIGURINE COLLECTION magazine knows how much fun they can be.

Thank you, John, for the great assignments.

I'd like to also thank so many of the terrific creators who have contributed to making these articles great. In the case of Moench and Perlin, they are personal heroes of mine so WEREWOLF BY NIGHT is a special issue for me. In other issues, Chris Claremont, Bob McLeod, Al Milgrom, Mike Deodato, Jr., and Danny Fingeroth were among the greats who have given me tremendous feedback.

And I want to single out the great writer Stan Lee, co-architect of the Marvel Comics Universe himself, for not only lending me quotes for my articles every time, but for getting back to me on them the same day (!!). He's a very patient man, that Smilin' Stan!

Finally, don't be shy - go to the website and take a gander at all the great figurines that have been issued by Eaglemoss across MFC's run -- they're fun to scroll through -- and buy a copy of MFC #188...just because owning a Werewolf by Night figurine in 2012-13 is pretty darn sweet!

High humidity can cause the paint on the action figures to peel and chip, can cause decals to fall off and joints to loosen, causing your figures to have a hard time maintaining their poses.