FLASHBACK 1999: mixin' it up with Red Buttons, Anthony Quinn and Casey Kasem....

Strange bedfellows indeed, but there I was, as a guest of my longtime buddy Adam Buttons, at the Beverly Hills Hotel back in February 1999, shortly before Valentine's Day, in celebration of the 80th birthday of Adam's father, the late, great Red Buttons.

Here is Aushenker the American with Zorba the Greek at comedian/Oscar- and Emmy-winning actor Red Buttons' 80th birthday party celebration at the Beverly Hills Hotel! 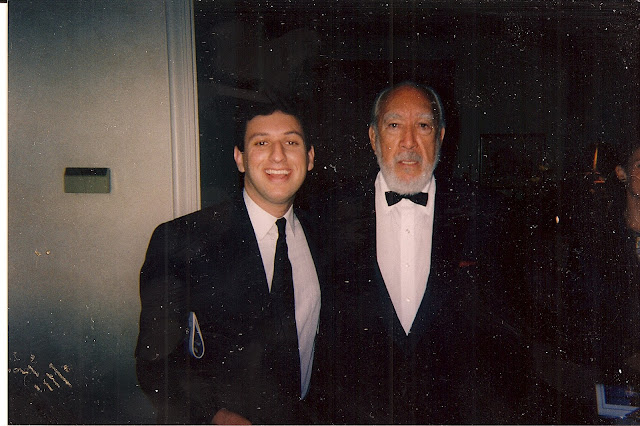 Here I am with Adam "The New Hollywood" Buttons and Casey (voice of Shaggy on "Scooby-Doo") Kasem. Also mingled with Esther and Carl Reiner at that party.

An epic evening thanks to my longtime pal Adam Daniel Buttons that I will never forget!

God bless Red Buttons memory, he was a comic genius who mastered the one-liner and he wrote his own material (unlike many of his generation of comedians...). I remember, even before I had met Adam Buttons, seeing Red at the events he emceed, such as at a Friar's Club benefit for a dying comedian that attracted Sid Ceasar, Milton Berle, "Get Smart" producer Leonard Stern and Arnold Schwarzenegger (!!) among the speakers. At the Friar's event, Red was sitting in back the entire time, scribbling on his notepad. He was writing and re-writing until his appearance - as the showstopper closer - when he just destroyed. Hilarious man! 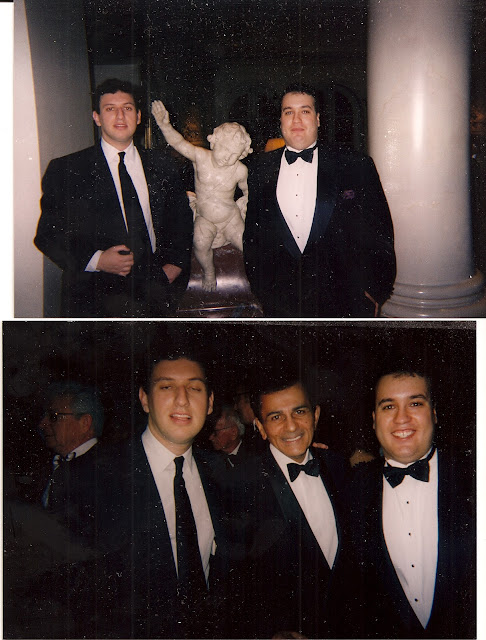 Years later, long after Adam and I became friends, Red Buttons, then into his early '80s, was scheduled to perform at a Beverly Wilshire fundraiser. It was on the night of a Lakers championship game, and I was in the back of the banquet hall where the younger audience members were more tuned into the game on the TV sets. Some of them were very disrespectful, mocking the benefit's headliner, whom they thought was old hat, passe', Squaresville!

Well, guess what? Not only did Red get up there and perform, he fuckin' killed the room, and everyone, INCLUDING the young cynics in the back, were roaring with laughter at his killer jokes and awesome delivery. And remember, unlike Berle, Hope and others of his generation, he always wrote his own material.

Red Buttons....comedian, Emmy-winnner, Oscar-winner (for "Sayonara" - he played opposite Marlon Brando - actor of his generation -and yet it was Buttons who won the Academy Award!)....February was Red's birthday month. He is truly missed!

Thankfully, he lives on via the entertainment he left us and in his children, Adam and Amy Buttons.

Amen, Buttons!
Posted by Greenblatt the Great! at 4:53 PM