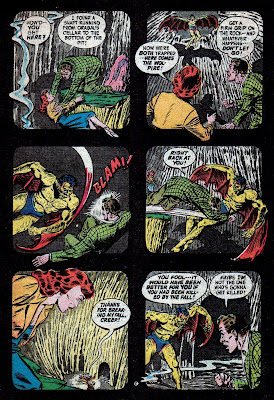 There's nothing scarier than a Tuesday. It follows Monday and it's not close enough to the weekend to start celebrating. So here are two interesting old-school monster strips which have caught my attention.

THE WOLPIRE rules. It's from March 1954, and it made me an instant fan of the work of HARRY LAZARUS, probably the least famous of the not-all-that-famous Lazarus Brothers cartoonists.

Manny Stallman is like my least favorite T.H.U.N.D.E.R. AGENTS artist. When I get to RAVEN, it's usually a quick skim. Even worse than Mike Sekowsky and his shitty LIGHTNING feature. If it's not Wally Wood's DYNAMO and whomever is drawing NOMAN, I'm not that into it. But I digress. Here's a winner which Stallman managed to muster together for some other publication called MONKEY FACE! 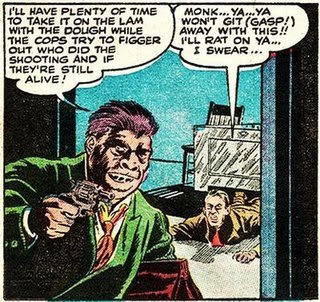 Enjoy! And if these strips get too scary, think happy thoughts about the weekend....
Posted by Greenblatt the Great! at 7:11 AM