This is one celebration I can get behind...

Cartoonist JOSE CABRERA is celebrating the 5th anniversary of his hilarious satirical strip CRYING MACHO MAN, which appears as a weekly Web comic and in collected book form in the trade paperbacks PRIME CUT and YOU SO LOCO. 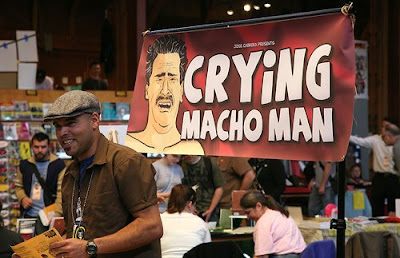 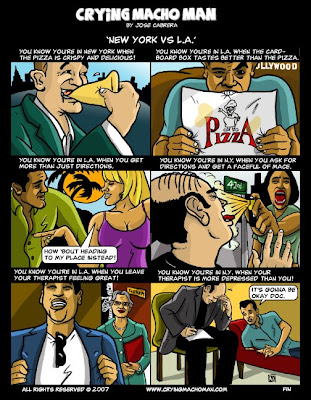 I love his strip and Jose, with his nice bald head, he's one of my best friends (which is NOT the reason I love this strip, it's great either way). What's particularly interesting about Jose as a cartoonist is that his visual style has been evolving over those five years, basically transforming from a wonderfully wordy clip art style to Photoshop-colored, minimally word-balooned visual feasts, to loose, cartoony black and white quickies. And wherever he takes the strip, I'm happy to be along for the ride.

You'd never know meeting Jose that this was the guy responsible for the acerbic wit in every self-contained CRYING MACHO MAN gag strip. In person, he's as sweet as a Smurf! But, man, what a crazy refreshingly politically incorrect id he unleashes in his comics. He gives MAD magazine a run for its MAD money, and let me tell you, we need more honest cartoonists like Cabrera.

If all goes well, Cabrera will have new CRYING MACHO MAN collections out by year's end. Cross your fingers on that one!

If you're truly a fan of humorous humor comics, CRYING MACHO MAN comes highly recommended. Support humor comics. Visit Jose's Web site at www.CryingMachoMan.com and get on his free weekly e-list. Your funny bone will be glad you did.

Congratulations, Cabby! Keep the ha-ha's coming!
Posted by Greenblatt the Great! at 10:54 AM

Wow! that crying macho man is so handsome. Can't to see what happens in another 5 years. Thanks for the Luv Mikey!!!