EVERYONE'S A CRITIC: passing comments on two unmemorable movies and one good one

REIGN OVER ME starring Adam Sandler and Don Cheadle. What ISN'T wrong with this movie? The climactic courtroom scene does have the most random collection of actors I've seen in a long time: Sandler, Cheadle, Donald Sutherland as the judge, THE OFFICE's B.J. Novak as the dick prosecuting lawyer, and Ted Raimi as Sandler's psychologist. Random!

TROPIC THUNDER is watchable enough to seen from beginning to end, but aside from Robert Downey Jr.'s scenes, it only approaches being funny. Above all, it proves once and for all that Tom Cruise can't act. His attempt to inhabit his character in this film is a train wreck. The lyrics to the rap songs he was getting down to were funnier than he was. 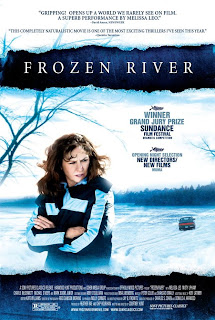 FROZEN RIVER may be be on the slight side story-wise. It may not be ambitious, but it's confidently directed and I enjoyed the performances. I didn't know much about this film going in and I'm glad I took it home. What more do you want from a rental?
Posted by Greenblatt the Great! at 6:09 PM