Went to see WILCO play at the Wiltern on Thurs. evening. However, it turned into a day I'll never forget....

First of all, it was a crummy day for '70s icons. If it wasn't sad enough that Farrah Fawcett had died, the news of Fawcett's death was eclipsed by evening when word spread that Michael Jackson had died. And not the radio personality but the King of Pop (although it was funny that some fans flocked to the wrong star on the Walk of Fame to pay tribute to Jackson).

I still can't believe that Michael Jackson is dead (and yet I can, given his lifestyle)....He may not be my favorite entertainer of all time, but he certainly was an Elvis-level icon with the greatest selling album of all time. And I did enjoy many of his songs, especially the album OFF THE WALL. It's definitely left a void in the entertainment industry. Which leads me back to the Wilco concert.

I was rather double-surprised that Jeff Tweedy, Wilco's lead singer, did not make any reference to either the passing of Michael Jackson or his late former band member, Jay Bennett. I've seen the film and I'm aware that he had a falling out with Bennett, who was fired from Wilco. Bennett tried to sue the band a week before he died. But he did contribute to the band's solid body of work, and aside from playing a song Bennett wrote, "Can't Stand It," there was no overt connection. I guess he's not going to talk about it every city he plays, but I still find it kind of cold.

I enjoyed seeing Wilco again but not as much as the other times at L.A.'s Greek Theater (and once at the Santa Barbara Bowl in 2007...I saw the first concert where Tweedy had turned 40). The venue was better at the Greek, under the stars (the Wiltern has weird reverb and if you stand behind a tall guy, as we did, your view is screwed! Great old building, lousy concert venue), as were the songs he played. I'll never forget the first time, at the Greek, in 2004. The bulk of the material was from my two favorite Wilco albums, their masterpiece, YANKEE HOTEL FOXTROT, and A GHOST IS BORN. They even played KAMERA, my favorite song on YHF, which they haven't played live since (the times I've seen them). We got to be in the pit, right at the foot of the stage, near the center where Tweedy was standing. Everyone danced and bounced all night, we really worked up a sweat! and I even painted this oil painting tribute to that night at the Greek. That's me in the bottom left corner, in the lime green shirt. The guy in the glasses is my pal, Jamie: 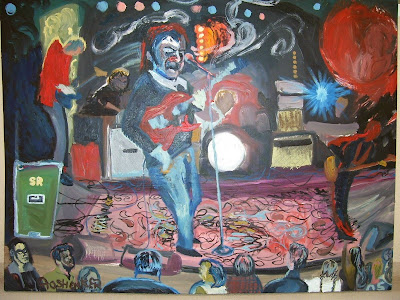 My problem with the June 25 concert, other than the distraction of Michael Jackson's death and the pall it cast over the day, was that, having seen the band now four times, there's a lack of spontaneity. The first time at the Greek, Wilco played a country-fied version of "I'm the Man Who Loves You." He jumped off the stage to dance with his wife and son during "Hummingbird," which closed the main set (pre-encores). This time around, he also closed the set with "Hummingbird," once again led a clap-along during "Kidsmoke" and played many of the same songs he did during the "Sky Blue Sky" tour. There's definitely a concert routine setting in. The new songs from the album they're releasing on Tuesday have not grown on me yet and they didn't stand out in concert, although it was nice when he brought out Feist (for the first time live) to perform the duet "You and I."

I'll definitely buy the new album and keep supporting this band, one of the greatest American rock acts. But I've seen the band four times now....maybe that's enough for now.
Posted by Greenblatt the Great! at 5:38 PM