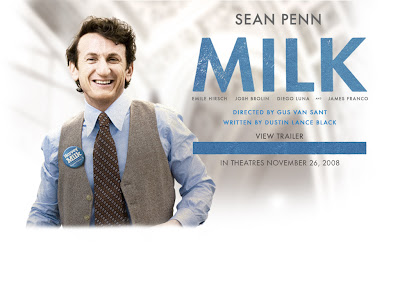 Finally saw the movie MILK over the weekend. I really dug it. I have four or five reasons why...

First, there are a lot of actors in the film that I dig...James Franco, Emile Hirsch, Josh Brolin, and, of course, Sean Penn.

Here's another first: this is the first Gus Van Zant movie (of the ones I've seen...not many...) that I liked. And that includes the goopy, often-annoying GOOD WILL HUNTING, which I thought was overrated. This sure beats the shot-for-shot remake of Hitchcock's PSYCHO. What an empty pursuit that was. I'm glad Mr. Van Zant found better things to do then copy other people's masterpieces and make them worse. I didn't see ELEPHANT because it was false advertising: there were no pachyderms in that movie as far as I could tell.

Second, I like a good underdog story, and the fact that Harvey Milk was 40 when he started his career was fascinating. Equally inspiring was how he kept losing and losing and losing elections, year after year, but that didn't deter him from trying again. Until he won. Great message.

Third, Sean Penn totally disappears into his role here. He deserved an Oscar because I didn't recognize him. I totally believed Penn was Harvey Milk. It's an amazing performance.

Another thing I enjoyed about this movie is that it's one of the more left-field biopics and as I really didn't know many details about Harvey Milk's life or death (even the details of how he was assassinated and who killed him), this felt fresh, thanks, in large part, to my ignorance of his story. Usually, going into a biopic, you either kind of know the history they're going to recreate, or you've seen too much about it in the advertising. Catching up with it on DVD, if I knew anything about the movie MILK, I had long forgotten it.

And fifth, the movie takes place in San Francisco, which is a part of California I enjoy visiting.

Speaking of Josh Brolin, Josh Brolin's about to star as JONAH HEX, kids. Nice 'n weird choice of DC Comics characters to give the big movie treatment to. That should be interesting. I hope THE UNKOWN SOLDIER: THE MOTION PICTURE isn't far behind...... 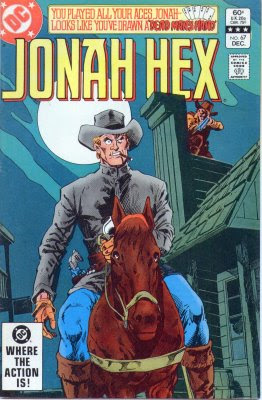 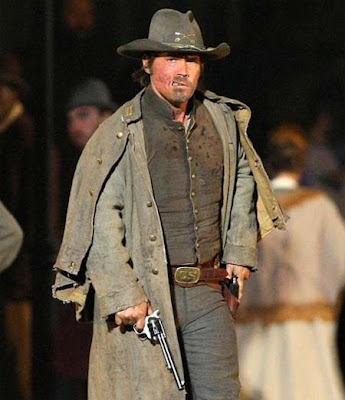 Posted by Greenblatt the Great! at 8:25 PM