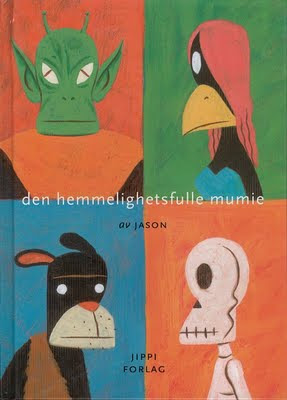 It's easy to look back and see who the comic book masters and influences are. Hugh Downs once said that "Hindsight is 20/20."

Herge ("Tintin") was huge. Charles Schultz ("Peanuts") is kind of eternally influential. So was Tezuka ("Astro Boy"), although I've only started reading his manga in recent years pending the translations.

Well, what about the cartoonists of today? Who among them will go the distance?

Well, nobody's asked me, but it's impossible to say.

However, here are my favorites among those working today and it's just my own subjective list, not necessarily reflecting reality, the real world or the general public or public enemy. I don't know whether or not these cartoonists are masters or will be influential down the road, but they're among the cartoonists I really enjoy who seem to do consistently interesting work.

JASON: The Norwegian cartoonist JASON ranks high on my list. He borrows from Herge and the Europeans and twists it into his own vocabulary. Some might find his use of anthropomorphic characters gimmicky or one-note, but it hasn't bugged me. I enjoy the stories he tells and the way he tells it. WHY ARE YOU DOING THIS?, I KILLED ADOLPH HITLER and THE LAST MUSKETEER are a lot of fun. I like his stuff 1,000 times better than, say, Woodring's "Frank" stuff which ran in the early '90s and left me cold, or Kaz, who does these unfunny gag-strips with characters that resemble mash-ups of Popeye and Nancy. In fact, I think indy comics are much better today than they were in the '80s and '90s, when there was less variety and ubiquity.

JOSE CABRERA: Jose's a buddy of mine, but he's also my favorite humor cartoonist. His satire is sharp, his gag cartoons make me chuckle. His PRIME CUT collection is one of my all-time favorite humor comics books. And now he's getting into gag cartoons big time and more running characters. Should get interesting.... 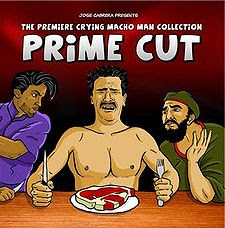 ADRIAN TOMINE: Visually, he can really evoke certain strips by Dan Clowes but other than that, his work has nothing in common with Clowes' warped humor or surreal stories, instead focusing on slice-of-life relationship stuff, which he does very masterfully. Some of his detractors say he's too emo but I think they're not manly enough to enjoy something emotionally vulnerable. I think his stuff is interesting and I enjoy reading OPTIC NERVE whenever it comes out.

RUTU MODAN: Her EXIT WOUNDS graphic novel was a major work, nicely weaving Israeli politics as a backdrop to her relationship story without ever getting political. The art was beautiful and a nice tip o' the hat to the European masters. And I enjoyed the short pieces in JAMILTI. She's a cartoonist I am looking forward to reading more of.

JAVIER HERNANDEZ & TED SEKO, THE XOMIX COMIX GUYS: Two more talented cartoonists I feel blessed to call good friends. Javier is a descendant of the Bronze Age, doing his twist on the sincere and schlocky superhero and monster series of 1970s Marvel and DC, but he also injects humor into his work and the occasional autobiographical comic. He's also not afraid to take his El Muerto, Aztec Zombie character and turn him into a manga version. He keeps his work lively and unpredictable. Meanwhile, Ted brings a storyboard artist's approach to spinning parables on relationships and his hopes and fears disguised as post-apocalyptic running-man tales or monster/horror meltdowns and showdowns. Creatively, these guys should be running Marvel, it would certainly make things interesting again. And The White Tiger would finally get his own series. If Jav and Ted drew and inked it, that would rock the house!

Posted by Greenblatt the Great! at 7:47 AM

Jason's work really keeps me coming back for more. His subtle storytelling, with it deceptively quite moments, has a way of sneaking in the larger issues of life and death, and all the meaty parts in-between.

Haven't read much of Tomine's work, but his SUMMER BLONDE book was a very well told tale of identity. He also has a quite way of unraveling his stories.

As for Cabrera and Seko...Well, these guys craft some really good comics. Whether it's humor or melodrama, these are two artists who use their characters and stories to reveal some great displays of human (or inhuman!) nature.

And...well..thanks Mikey for the kind words. That steady diet I grew up on, Bronze Age schlock and superhero sincerity, has paid off!