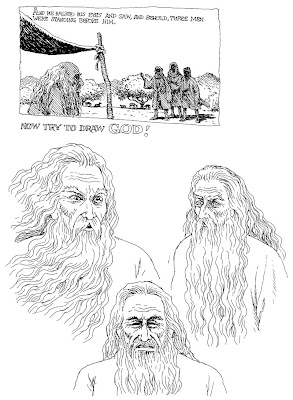 Hear ye, hear ye! There are two shows going on at the Hammer Museum in Westwood right now through early Jan. and early Feb. respectively that are just dynamic. The Charles Burchfield art (mostly watercolors and pencil sketches with a few oils in there) and the R. Crumb original art from his "Book of Genesis" graphic novel.

Below is my review of the Crumb show, which ran in the Post on Thanksgiving Day. My review in a sentence: Let's all hope he can squeak out his take on Exodus before he croaks!

My review for the Burchfield show will pop up in the December 10 edition. Believe that!

You don’t have to be religious or a fan of underground comics to appreciate “The Book of Genesis Illustrated by R. Crumb,” an ambitious work by seminal underground cartoonist Robert Crumb. All of the original pen-and-ink art from the 224-page book, which came out in October, are currently on display at the Hammer Museum in Westwood through February 7.
The uninhibited Crumb has been accused of a lot of things: racism, sexism, and assorted irreverence. Religiosity is not one of them, nor is hypocrisy. Through interviews (such as the one he gave before a live Royce Hall audience on October 30) and through his work, Crumb sanguinely admits to his foibles, prejudices and fetishes.
From the creation of mankind with Adam and Eve to the death of 110-year-old Joseph, “Genesis” appears to be a faithful, un-ironic adaptation. All the familiar personages and events are here: Abraham, Sarah, Jacob, Cain and Abel, Leah, etc.
Crumb’s lively character designs invigorate the proceedings. His wonderfully detailed depiction of God, which haunts Abram on pages 38 and 43, is at once the cliché white-bearded old man and something fresh, with an energy that recalls the naïve art of primitive cartoonist Fletcher Hanks. His upright, bipedal serpent looks deliciously monstrous before he is turned into a lowly snake. And no one will mistake the female characters, with their ripe assets and their common, borderline homely faces, as anything other than Crumb creations.
People familiar with Crumb’s work may be surprised by the amount of restraint he demonstrates in “Genesis.” Yes, Crumb depicts much of the sex, violence and mass carnage inherent in the first book of the Old Testament, but not as explicitly as one might expect from the creator of such freewheeling, Haight-Ashbury-era characters as Mr. Natural and Fritz the Cat. Sex scenes, often nocturnal and moonlit, are mostly implied and tame, almost tasteful. Except for two tear-drop squirts of blood, the circumcision of 13-year-old Ishmael takes place out of panel.
Five years in the making, Crumb’s black and white art from “Book of Genesis” adorns a lot of wall, the ink work spanning across the gallery in a spiral, ending at the entrance of a central room where one can lounge and view copies of the finished printed product.
The actual art is much more alive and tactile than viewing the more “perfect” book. God may be perfect but Crumb is not. His penchant for perfectionism is on display in the originals (witness the white-out around the characters’ nipples and genitalia on certain pages), but those blemishes only add to the imperfect beauty of these pages. The paired-off animals that kick off chapter 7’s retelling of Noah’s Ark are children’s book-whimsical. The detail¬¬––whether it’s the great flood of 40 days and 40 nights, the cataclysmic rain of brimstone and fire unto Sodom and Gomorrah (on page 61), the traffic of God’s messengers climbing and descending the stairway to Heaven (p. 102), Pharaoh’s epic birthday feast (Chapter 40), or the rendering of a mushroom-cloud tree that takes up a large panel (p. 6)––will draw viewers up close to the posted pages.
In reviewing ‘Book of Genesis,” Crumb loyalists may wind up overrating this work, but there’s no denying that it’s a towering achievement (and not just the part about Babel). You don’t have to “enjoy” the cartoonist’s oft-controversial work to recognize its genius on a technical level. If Crumb’s content may be difficult to swallow, his masterful cartooning style often makes up for it.
Short of “Crumb,” Terry Zwigoff’s masterful 1994 documentary on the cartoonist and his brothers, there is probably no better way to appreciate Robert Crumb’s artistry than to take a good gander at his original art, warts and all. “The Bible Illuminated” provides just such an occasion.
For more information, visit hammer.ucla.edu or call (310) 443-7000.

CAPTION: God creates the world and mankind in cartoonist R. Crumb’s work, on display at the Hammer Museum show “The Bible Illuminated: R. Crumb’s Book of Genesis.”
Posted by Greenblatt the Great! at 6:20 AM