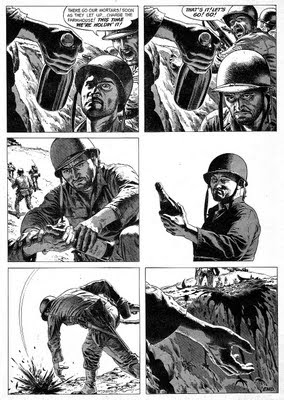 Fun times at this year's CAPS banquet at the WWII-themed 94th Aero Squadron Restaurant near the Van Nuys airport, where my friend Russ Heath was honored. Russ and I bonded at a shoot for the TV show NUMB3RS in November 2007, alongside CAPSers Tone Rodriguez and Anson and Benton Jew. What I love about Russ is that he's always good humored and quick with the wit! And he's got anecdotes galore!
I had never been to or heard of the restaurant before this banquet, and the decor was pretty comical (of course, appropo for Heath given the art he's known for). It looked like a place The Invaders would descend on...or at the very least, where WWII Snoopy would stop in for a root beer. The cocktail hour was held in a replica of a bombed-out bunker, and the Lindsay Sisters, in Andrew Sisters fashion, sang some tributes to Russ, who will be 84 this month. I'm guessing standing alongside them that trio took him back to his days at the Playboy Mansion in Chicago, where he was one of Hugh Hefner's favorite cartoonists, partying it up Mike Sekowsky style.
Thankfully, this year, I was seated at one of the cool tables with the two Phils, Yeh and Ortiz, who always make for good dinner company; their guests; the one and only Jim Wheelock; and the other one and only, my buddy Jerry Boyd, a fellow BACK ISSUE magazine contributor. Boyd and I were coincidentally wearing matching charcoal pinstripe suits (that's going to be a nightmare once the photos hit the tabs!).
Boyd has been coming to CAPS banquets since 2007, when we double-honored the great Jack Davis and surprised the great Sergio Aragones with a Sergio Award of his own. That year was definitely one of the all-time best banquets, along with the Stan Lee, Jerry Robinson, and Jonathan Winters years.
A good time was had by us cartoonists (well, with the crazy exception of one kiddie-comics illustrator who was apparently in an ugly mood and got his short-pants in a bunch....). It was fun catching up with Russ, Sergio, Stan Sakai, both Phils, Jerry, Jim, Brad Rader (whose new FOGTOWN graphic novel looks awesome), the Jew Bros., and the one and only Mell Lazarus.
One down side: my partner-in-crime on GUMBY'S GANG STARRING POKEY, the artist Rafael Navarro, was unable to make it this year...but thankfully, I saw him late the night before at the party Jose Cabrera and I hosted at Geeks Comics Shop in Uptown Whittier. So in the big cosmic picture, Mr. N was weaved into the tapestry of this cartoonist party weekend.
Posted by Greenblatt the Great! at 3:54 PM

Michael Aushenker's is such agreat artist of cartoon pictures such wonderfull ...... pic nice thoes pic which displayed in blog