Stan Lee Fever: 88 on Dec. 28, Followed by a Star this week on Hollywood's Walk of Fame 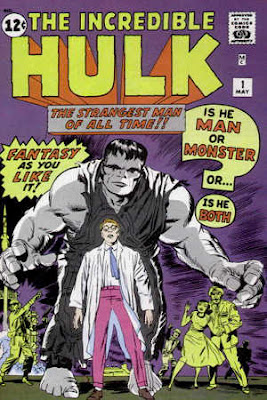 The most tired argument in superhero comics is who did what. Usually, it's waged to convey that Stan Lee was the Great Exploiter on the backs of geniuses such as Jack Kirby and Steve Ditko, with whom he created the Marvel Universe, the Silver Age of Comics, and the most enduring characters in comicdom all simultaneously.
Well, guess what, haters? Lee is a genius, too, right up there with Kirby and Ditko. It took all of them (and several other talented types, such as Don Heck, Gene Colan, Joe Sinott, Bill Everett and Wally Wood) to create the brilliant Marvel Universe in the 1960s. Whatever percentile from whom did what is really irrelevant in the bigger picture, as they were parts of the bigger whole. Whatever personal politics went on between them is between them! The characters they created will outlive all of that, and I personally have respect for all of them for their contributions to some classic characters (and my terrific childhood!)
My pal Javier Hernandez posted lots of classic Lee/Kirby/Ditko covers over at his blog. In addition, here are some pics from the time we met Stan Lee at the CAPS banquet a few years ago, when Lee was honored. A fellow southpaw, Lee graciously let loose his left hand to sign up dozens of books for a bunch of professional cartoonists who were reduced to slavish fanboys in his presence. 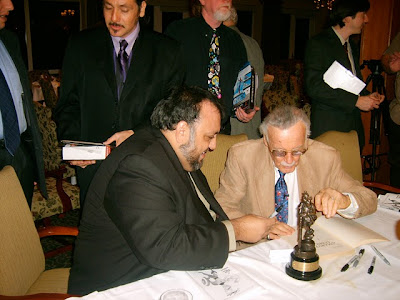 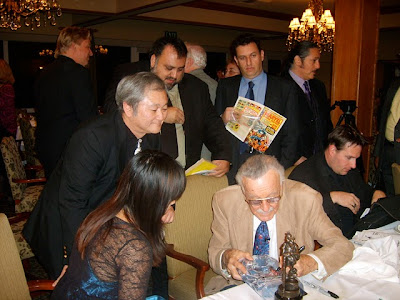 That's me, the stunned looking guy holding the first comic book I ever received at age 6: MARVEL DOUBLE FEATURE #10. That copy I'm holding was signed by Jack Kirby when I met him in 1992 at the first San Diego Comic-Con I ever attended, and here I am just minutes away from getting it signed by Kirby's collaborator on all those wonderful books.
Thanks to Javier Hernandez for the great photos and the great memories.....
Posted by Greenblatt the Great! at 12:25 AM

The second oldest argument in comics is whether what's-his-name was either putting a hex on you, or waving off flies, as he drove away the evening of the Stan Lee banquet.