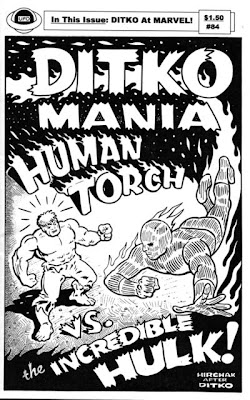 This issue, edited by Rob Imes, celebrates Steve Ditko's Marvel Comics work. Spirits are high over in Ditkoland as June will see Marvel release a previously promised but unpublished Hulk and Human Torch one-off issue drawn by Mr. D.
Here's how to get a hold of DITKOMANIA #84. My DITKOTOMY column this issue is part one of a two part look at Mort Todd's years as an editor at Marvel, working with Ditko and reviving Ditko's work - both assigning him new art and classic horror reprints - within the pages of several titles he was overseeing. This was in the early 1990s.
Also promised at the original time of the Human Torch/Hulk book in an editorial was a Moon Knight feature by Ditko but that one has not been located yet. That would be more exciting to me, personally. It leaves me wondering if that Moon Knight piece was originally meant for a Marvel Preview that featured a Sienkiewicz Moon Knight front and center and Ditko's take on The Shroud as a back up feature.
Posted by Greenblatt the Great! at 7:32 PM