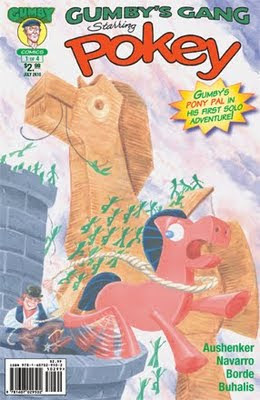 Hot on the heels of hangin' out with my buddy Rafael Navarro at today's Fantastic Fourth Laguna Beach Blast-Off signing (my head's still spinnin' from the fun times there), here's a rave review by Comics Journal reviewer Rob Clough for our love child, the epic kiddie comic GUMBY'S GANG STARRING POKEY. Here's the link to Clough's full-scale kiddie comic wrap-up, which includes several other comics aimed at the youngins, and below is a re-posting of his review, which is very positive. In addition to the talents he notes, I have to thank our publisher, Mel Smith, and our editor, Paul Birch, for their input in shaping our book.
JULY 3, 2011 post at HIGHLOWCOMICS.BLOGSPOT.COM
Gumby's Gang Starring Pokey #1, by Michael Aushenker & Rafael Navarro. (Gumby Comics. Aimed roughly at ages 7-10.) This is an agreeably dopey comic jammed with funny visuals, dumb puns and just plain nonsense. In other words, this time travel story is a snug fit in the continuum of strangeness that is the world of Gumby & Pokey. Navarro's loopy line and Lance Borde's garish colors give the reader something interesting to look at in every panel. Gumby and Pokey are funny-looking characters to begin with, but Navarro's drawings of Gumby & Pokey as Run-DMC, cube-headed people of the future and Gumby climbing the Trojan Horse are simply funny apart from their larger context. Aushenker's references to 80s rap, the Minutemen, and Suicidal Tendencies are meant to fly over the heads of any kids who happen to be reading the comic (sort of the way The Adventures of Rocky & Bullwinkle did). Aushenker's frantic, silly and absurd style of humor is a contrast to the gentler, slower pace of the original cartoons, but creator Art Clokey designed these clay characters to be flexible in every sense of the word. Aushenker clearly respects the source material but exploits that flexibility to expand the world and references of its star characters. I don't think every kid who reads this would like it, but a certain kind of kid to whom absurdism is appealing would no doubt re-read it endlessly.
Posted by Greenblatt the Great! at 10:53 PM