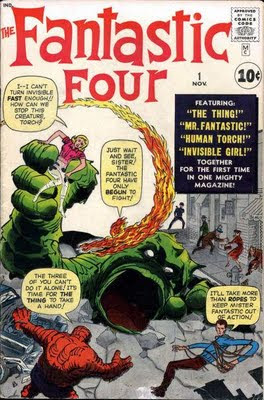 Even though I was not yet born when this issue came out 50 years ago today, this book was destined to change and shape my life. Can you dig it?

Growing up, there was nothing like Marvel Comics, and I'll never forget the joy they showered unto my childhood. The first comic book I ever bought was this one, MARVEL DOUBLE FEATURE #10, with a Lee/Kirby Cap feature and a Lee/Colan Iron Man back-up story: 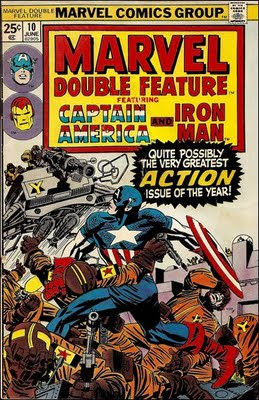 If you've read enough Marvel Comics, there's nothing special about this issue...Just another book for Lee and the gang...Yet another comic that pitted Cap against the Red Skull, Iron Man vs. Growing Man, etc.

Oh, except that this issue was VERY special when you're only six years old, G, and it's the very first comic book that you've ever read! (Purchased by my grandparents for me, when I was age 6, off the spinner rack at Irving's Pizza in Canarsie, Brooklyn.)

Fifty years ago today, the great Jack Kirby, via Mr. Fantastic's flare gun, fired the first shot of a revolution heard around the world: the true beginning of modern Marvel Comics.

FF#1 and all of the other Stan Lee-written comics of the 1960s, with imaginative art by Kirby, Steve Ditko, Gene Colan, Don Heck, Wally Wood, Bill Everett, and Johns Romita and Buscema, collectively since dubbed the Silver Age of Comics, were game-changing. The most influential American comics short of, perhaps, those original Superman and Batman comics...but I loved Marvel Comics more!

As a result of this titantic issue above, I continued to squander my allowance on Marvel Comics throughout the '70s and '80s, and I kept drawing, and I yearned to make a career based around creating, writing, drawing, comics, etc.

Then, somewhere in 1993, as American comics plunged face-first into the Digital Age, Marvel Comics put a rocket pack on its back and dove into a giant toilet while DC Comics sunk like a damn anchor. See, Stan Lee and all those original cats who drew the hell out of those books were long gone...and with it, they took the creativity and innovation. The House of Ideas became a House of Recycled Ideas.

Who knew that the landmark year of 1986 -- when "Watchmen" and "The Dark Knight Returns" were released, they not only signified a watershed of mature and sophisticated superhero comics that this was more or less the last time we would see such superhero comics.

Thanks to the future Image artists, Photoshop, sycophantic Watchmen/DKR "grim 'n' gritty" copycats, and the corrosive influence on superhero comics by the popularization of manga (no offense to manga, a fine comics form in its own right that is superb when the Japanese cartoonists do it...), Marvel and DC Comics were bled dry of their charm, style, and new ideas.

Thank goodness for Hollywood, or else there'd be nothing exciting about Marvel anymore (and even that can be hit or miss...)

(Note: This is not a rant against comics in general. The comic book form has never been more ambitious and glorious. The world of comics is alive with amazing art comics, autobio comics, humor comics, kiddie comics, historical comics, slice-of-life comics, European and Asian comics, webcomics...In other words, every sector of comics EXCEPT the superhero stuff.)

Instead of scratching their heads and trying to figure out why superhero comics don't sell anymore, perhaps the executives working at these glorified toilet machines they have the nerve to still call Marvel and DC should start by looking at issue #1 --- no, not issue #1 of their crappy re-numbered comics (which are no better than the crappy comics they've published for the past 20 years) but FANTASTIC FOUR #1--- and try to honestly figure out how and why Stan Lee and company made superhero comics so magical and exciting.
Posted by Greenblatt the Great! at 4:48 PM

Mikey, in all my years of reading everything about Kirby and comics, your line about Kirby, via Mr. Fantastic, firing 'the first shot of a revolution heard round the world: the true beginning of modern Marvel Comics' is as succinct a description I've ever heard of what Kirby and Lee launched with that first little issue, lo those many years ago.

FANTASTIC FOUR, under the direction of Stan and Jack, remains on the great runs of comics ever, in any country. When they really hit light-speed in the run between issues 50-100...Wow. A veritable mind-boggling amount of imaginative ideas and new characters. And the interaction between the four members, truly a family in every sense of the word, gives the book a voice unlike any other in American comics.

To celebrate this momentous occasion, Marvel currently is publishing a book called The Future Foundation. Since they called off the Human Torch, the molded the Fantastic Four into the Future Foundation. Now they all wear white costumes, and their membership contains Reed and Sue's son and daughter, Dr. Doom and good ol' Spider-Man!

And this just backs up your earlier assertion of creative bankruptcy, inane ideas and desperate little men shuffling the decks on the titanic....

Man, I thought you were joking about this Future Foundation concept but then I remembered that the Human Torch is supposed to be dead, right?