Recent flicks I enjoyed: RISE OF THE PLANET OF THE APES, HARRY POTTER, THOR, 9, BROOKLYN'S FINEST 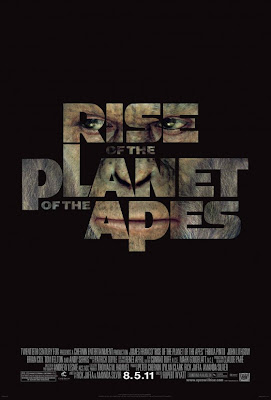 In most cases, remakes, sequels and prequels make me cringe...but sometimes a good reboot is a good opportunity to start over and try something fresh without insulting the source material.

I'm an old-school POTA fan. I grew up digging the original and its increasingly less-satisfying sequels. I recently re-watched episodes of the POTA TV show and they hold up pretty damn dirty well for a one-hour show based on APES. So what I don't want to see is another cheesy, creatively vacant POTA blockbuster like Burton's movie (the ape makeup aside).

RISE OF THE PLANET OF THE APES managed to offer an alternate take on the POTA mythology that felt fresh and fun. The CG, for once, is pretty amazing, as they've made a sympathetic character out of Ceasar. You wind up rooting for the apes to win, but that means betting against us humans. I don't want to overhype RISE/APES, it's not a classic and it will no way ever upstage the chilling effect of the clever original APES movies on me and my childhood. But if you go in with an open mind, it's a very entertaining movie with charms all its own.

I also caught the HARRY POTTER finale this weekend. I'm not a big fan of the series, I've only seen three of these movies, and I enjoyed Part I of Deathly Hallows more than this one, but Part II was decent and an okay wrap-up to a series that I'm not that emotionally invested in (only read the first book). I was hoping Harry would use the Elder Wand to resurrect Dobby the House Elf, who bit it in the last movie...but that selfish bastard only thinks about himself. Oh, well....Entertaining...but I personally enjoyed RISE/APES way more.

I've moaned all summer how bad THOR looked based on its trailer and print ads, but THOR, as it turned out, was not the THORture I expected. Some of my first impressions held true: Asgard looks chinsy-phony at times (although the Rainbow Bridge was cool), the multi-racial Asgard is a stretch, Anthony Hopkins kind of phones in this role for the 1,000th time, and they gave Destroyer nothing to destroy in that one-horse New Mexico town (Kirby would've placed the battle in Manhattan with millions of lives hanging in the balance). That said, like X-MEN: FIRST CLASS, the two stars of THOR carried this movie on their shoulders. That is, the actors playing Thor and Loki. Natalie Portman is easy on the eyes but I always found her to be an unconvincing actress and an irritant - here, unlike in so many other movies, her unimpressive, flat acting does not get in the way of the fun. The Hawkeye cameo will take some work to pick out. The Samuel L. Jackson Nick Fury needs to drive himself off of a cliff. He's such a load.

So far, in this summer's superhero derby, I rank X-MEN: FIRST CLASS first, followed by THOR and GREEN LANTERN (unfortunately) at the bottom. I'm going to see CAPTAIN AMERICA: THE FIRST AVENGER this week so we'll see where that falls among these movies.

If only those Marvel execs had not pissed off Ed Norton, we might've had our HULK sequel by now, co-starring The Leader. Instead we got GREEN LANTERN's creepy Hector Hammond. Yuck.

The animated Tim Burton-produced "9," which took a familiar kind of concept but executed it very well. It might be, indirectly, reminiscent of another futureshock animated feature "Wall-E." For homogenous creatures with numerical names, "9" and its animators breathed a lot of life and personality into these characters. I enjoyed "Coraline" at the time but I don't remember it anymore, I think "9" will stick with me. Do not confuse this movie with "Nine," that dumb musical.

Highly-recommended: "Brooklyn's Finest" is by the same director who gave us "Training Day," but this one is way better. (I enjoyed "Training Day" but found Denzel Washington's performance too showy and scenery-chewing by the movie's end.) This corrupt cops movie 'Brooklyn's Finest" kind of came and went, but it's more grounded in reality and the acting in this movie is tremendous: Don Cheadle is especially in fine form (as if anticipating his crappy role the following year in "Iron Man 2")...Wesley Snipes, Richard Gere, and even Ethan Hawke all pull their weight and give powerhouse performances. Ellen Barkin has a good scene. You've probably never heard of this film, which is too bad...It really warrants some word of mouth. Kind of like a good '70s Hollywood movie with an excellent climactic finale. A really nice surprise and one of the best films I've seen in a while. 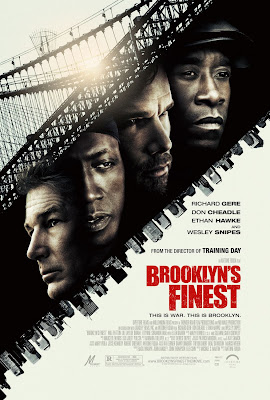 Posted by Greenblatt the Great! at 4:15 PM

wow. You summed up my reaction to TRAINING DAY precisely. And I have also seen BROOKLYN"s FINEST and thought it very good indeed.

I look foward to hearing your take on CAP!

Wow, Jamie, you're the first other person I've met who has seen BROOKLYN'S FINEST. Man, was that intense or what?

Baby, you were right about THOR, I trust CAP will be up there based on a lot of positive buzz. I'll definitely post my reaction and re-rank this summer's superhero flicks! To be cont'd after Tuesday...