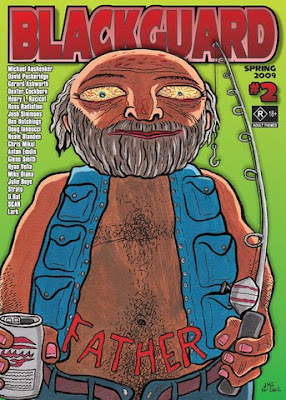 One of the most prestigious comic book anthologies in Australia is called BLACKGUARD.

Issue #2 is the "Father" issue and I happen to have a few father-themed GREENBLATT THE GREAT! strips in it.

Issue #1 was a hoot, a mix of styles, and even the long lost Mike Diana had a few wild strips in it. Remember that guy, he was single-handedly shutting down comic book shops with his crazy content!

Look, I'm not gonna bullshit you, friends, these are tough times to be a battlin' independent cartoonist. The comic book industry has a monopoly going on when it comes to distribution, and with this new Disney/Marvel marriage from Bald Mountain (or wherever that demon in FANTASIA came from), there's a good chance that the one and only distributor will go under.

So if you want to get some quality comics, you gotta root out these books and cough up the dough. Point blank! Thanks to the Internet (yeah, thanks a lot, Internet!), people expect to get everything these days for free. But if you want some quality, you gotta part with some dough and support some artists once in a while.

Do you honestly think your favorite artists and musicians and moviemakers are gonna get paid if you don't patronize their art or just download it for free? Well, the Internet is sure as hell is not gonna pay anyone. In fact, it's obliterating entire industries as we speak!

"Hey, guess what everybody? They created the Internet and forgot to monetize it! OOPS!"

OK, I gotta put on my helmet and make like Super Dave Osbourne as I go out there and fight the good war in bringing you the funny! But I hope you get the gist of my sales pitch here. I don't have enough freebies to go around, and Stuart Stratu needs your help. So be a supporter of the Australian arts and pick up Stratu's BLACKGUARD comics. All the ordering info is at http://blackguard23.livejournal.com/

Michael "Soap Boxer" Aushenker
Posted by Greenblatt the Great! at 7:45 AM