THE ORB is ready for his spotlight, folks! 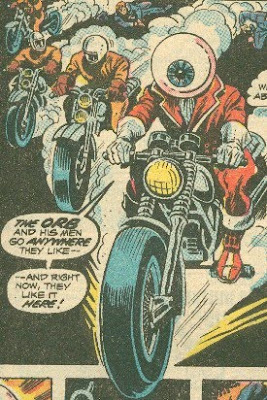 This Variety article below on David Goyer writing a sequel to GHOST RIDER is filled with revelations. (By the way, I read that original Goyer GR script. It was R-rated. I hope they keep that kind of edge on a sequel).

My reactions to various revelations:

--A Ghost Rider sequel? Have fun improving on the original...Don't forget to throw in the Orb :)

--Dr. Strange and Nick Fury I can see as coveted movie properties....but Power Pack? Why go straight to the bottom of the barrel when you've got Moon Knight, A Man Called Nova and Spider-Woman?

--A "Ghost in the Shell" live action flick? Hmm. Guess that cartoon has a following although I thought it was slow.

--A CG animated feature based on Popeye? Another CG Popeye cartoon? Why? Why? WHY?????

The Marvel universe is going to be a very busy place for the next few years.
Columbia Pictures is the latest studio to rev up a Marvel project on the heels of Disney's pact to acquire Marvel Entertainment in a $4 billion deal.

Col is working on a second installment of "Ghost Rider," with David Goyer in early talks to create the story and supervise writers for a film expected to once again star Nicolas Cage. Former Marvel topper Avi Arad, Michael De Luca and Steven Paul are producing, with Gary Foster as exec producer.

The "Ghost Rider" push comes amid a flurry of activity with Marvel characters at Sony, Fox, Universal and Paramount. The movement is necessary for those studios to retain rights to their respective Marvel superheroes. If the properties languish, the rights can be reclaimed by Marvel Entertainment, which is what happened with such properties as Dr. Strange, Black Panther and Iron Man. Iron Man was gathering dust at New Line for some time before Marvel turned the property into a self-financed blockbuster last year.

Sony recently set James Vanderbilt to write the fifth and sixth installments in the "Spider-Man" series, and Universal continues work on "Sub-Mariner." Par continues as distributor for "Iron Man 2," and other Marvel superhero pics at the studio are expected to include "Thor" and "Captain America."
Through a spokesman, Goyer said he hadn't signed on to a second "Ghost Rider" yet. But plans are already under way to base the sequel on a "Ghost Rider" script written years ago by Goyer, whose superhero work includes hit screen transfers of DC's "Batman Begins" and Marvel's "Blade" franchise. The original "Ghost Rider" was scripted by director Mark Steven Johnson.

Arad told Daily Variety that Hollywood's unquenchable interest in Marvel properties and the pricetag that the company is fetching from Disney is a validation of the strategy that he and Ike Perlmutter executed at Marvel starting in the early 1990s. Arad ran Marvel from 1993 through 2007, when he left to start a film company with son Ari just after Marvel locked in a $525 million credit facility.More than one option
(Co) Daily Variety
Filmography, Year, Role
(Co) Daily Variety

Arad said he left because he was exhausted and because he was convinced that his No. 2, Kevin Feige, was ready to take over. Arad's confidence in Feige is reinforced by the fact that the exec has emerged as a possible replacement for Disney film topper Dick Cook after making a strong impression on Disney topper Bob Iger during the acquisition negotiations that concluded in late August (Daily Variety, Sept. 1).

Arad said the current demand for Marvel properties stands in sharp contrast to the company's fortunes in the late 1990s, when it was in bankruptcy and Arad and Perlmutter persuaded creditors to spurn an offer of $350 million in cash from Carl Icahn. Arad was convinced at the time that "Spider-Man" alone could be turned into a billion-dollar movie enterprise. Since that time, "X-Men" and "Blade" have also joined the billion-dollar B.O. club, and "Iron Man" is well on its way.

"I had this poster of the Marvel universe, with these beautifully drawn characters, and we used to say you could throw a dart, hit a character and make a hit movie under the Marvel brand," Arad said. "There is a long list yet to be unleashed. I think this will look like a smart deal over time because Disney is a company that knows how to exploit a brand."

Arad is separately developing a slate that includes the Catherine Hardwicke-directed adaptation of the James Patterson book series "Maximum Ride" at Columbia and "Ghost in the Shell" for DreamWorks. Arad has also secured rights to make a CG-animated feature based on the venerable strongman Popeye.
Posted by Greenblatt the Great! at 6:37 AM