....Was that Glenn Close or Sarah Jessica Parker? And can anyone tell them apart anymore?....Rainn Wilson lost, while Chandra Wilson (no relation) was nominated for two Emmys for two different projects (hog!)....I liked the Best Miniseries winners this year better than last year because Drew Barrymore and Jessica Lange wore funnier Colonial wigs than Paul Giamatti and Laura Linney....Good for NPH, I've enjoyed NPH ever since his bit roles in UNDERCOVER BROTHER and the HAROLD & KUMAR movies....Why is the whole world in lockstep gushing over THE DAILY SHOW (it's 9th Emmy!!) and FAMILY GUY, two shows I need to be tied down to the chair, werewolf-style, in order to sit through more than 5 minutes of them?....Giving 30 ROCK the awards was lazy, great show, bad season, shoulda all gone to THE OFFICE instead, season 5 was probably its best one yet...As soon as the characters from FAMILY GUY open their mouths with their lousy, unsubtle voices, it reminds me of high school, where you'd punch the nerds when they quoted HOLY GRAIL....How many CRIME SCENE INVESTIGATION shows are there now? Haven't they run out of major cities?....I just read online that THE WIRE never won an Emmy when it was on the air (et tu, SOPRANOS?), now THAT'S a crime CSI: BALTIMORE should look into...All of the winning TV writers seemed gay until they opened their mouths and thanked their wives and children...What's with the split screens and overheard command center conversation going in and out of commercials? Is this supposed to make me feel like an insider? It only makes me feel like I'm working on the broadcast and my boss is yelling at me?....When they showed all of the celebrities who died in the past year, they forgot to include CAPTAIN AMERICA. Oops, that's comics, sorry...Here's your moment of zen, Jon Stewart fans: THE DAILY SHOW just won its 9th Emmy and THE MUNSTERS never won one. Now who is more memorable, Jon Stewart or Herman Munster?....Remind me again why FAMILY GUY is funny?....When is Rainn Wilson gonna get his Emmy, scratch that, let him host the Emmys next year. OK, two sniffles, a buttermilk pancake, and I'm out. Quack, quack! 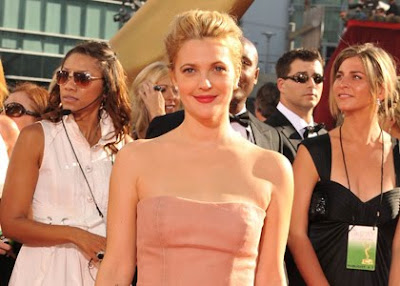 Barrymore at last night's Emmy Awards: "A spot of tea while I clean off your musket, General Washington?"
Posted by Greenblatt the Great! at 7:50 AM