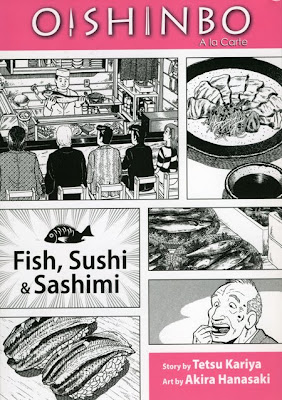 I want to thank my lovely girlfriend, Laura, a woman of class and taste (and, ironically, a vegetarian), for getting this book for me. It's the fourth in a series of manga comics set in the culinary world. It's all about the preparation and execution. Every edition tackles another food group. The just-released fifth edition is about cooking vegetables.

In this fourth book, the lead characters are journalists for a newspaper that is compiling an "Ultimate Menu" and along the way, the young reporter male lead goes head to head with his father in a battle royale over who can come up with the best tasting fish dish. Along the way, you learn about fish and the preparation of them, with realistically drawn fish intermingled with the cartoony principles.

My favorite chapter so far (still reading it) is Round 4, in which the young reporter must save an orphanage by going up against the head of the Yoto Group, which owns the orphanage building and threatens to shut it down, and winning the round by producing the superior dish.

Highly recommended (but don't eat it on an empty stomach).

It's a simple premise, well-executed, and one of the best manga I've read. It's up there with OLD BOY and Tezuka's BLACK JACK.

I'm looking forward to catching up with the other volumes, even though I rather read about sushi then vegetables. However, my girlfriend is a vegetarian, so I'll bet she'll dig the latter volume.
Posted by Greenblatt the Great! at 10:14 PM

Wow, what a cool idea for a series! Then again, it's Japan, not our beloved U.S. comics market that has an insatiable fixation on chewing up and regurgitating every last superhero trick created in the past 70 years! (Do Quesada and Brevoort read this blog??)

I will look for this series, and particularly the Sushi entry (or is that entree??). And yeah, BLACK JACK is a phenomenal series. An outlaw hero surgeon?? That's OsamuCare at it's finest!

Javy, what I love about some genres of manga is how the mundane (sports, cooking, etc.) can be elevated to mythic, superhero-level status. The Oishinbo series is just such a series. I'm digging it! I also love the art style - overall cartoony, but super-serious and realistically rendered when the fish is discussed. I highly recommend this volume as a starter into the series. It's a strong one.

Can I recommend a theme for a future Oishinbo?*