MIKE VOSBURG is a trip!

Back in March 2008, I interviewed artist MIKE VOSBURG, a longtime acquaintance of mine from CAPS, and the resulting interview appears in this issue, BACK ISSUE # 35: 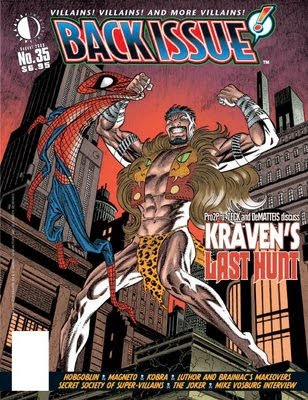 The Voz is one of the most gifted, complex and winning cartoonists ever to cross through CAPS's hallowed Burbank halls. I've always appreciated his no-nonsense take on everything and his candor. Like product from GM and Chrysler's assembly lines, he was forged in Detroit, so he doesn't take any nonsense, especially from showboats and windbags (in CAPS, we've had a couple [...cough, DOZEN, cough, cough!] over the years). 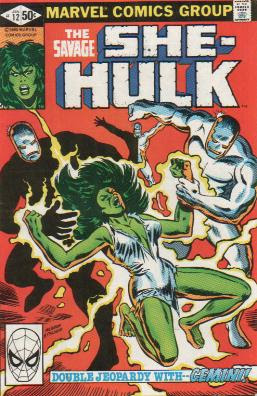 Here's a fond CAPS memory of me and the Voz back circa 2002 (according to that copy of the original CARTOON FLOPHOUSE comic on that there table there)....back when Burbank was verdant and didn't have gigantic pyrocumuli lingering in the sky behind it (they lingered inside the CAPS meetings instead). 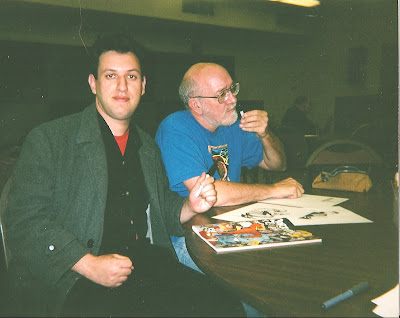 Vosburg's thoughts on his career and profession makes for an interesting read. His career has been diverse, spanning from comics to storyboarding movies and music videos to animation (for which he won an Emmy for directing an episode of SPAWN). I think that interview alone is worth the price of admission.

Beyond Vosburg, BACK ISSUE # 35, the "Villains" issue, is surprisingly nimble and interesting given the theme (which frankly I wasn't sure if it would fly). My highlights were the back story on the Hobgoblin run in SPIDER-MAN, which was ridiculously frought with tension and petty internal politics behind the scenes. After that, DeMatteis discussing KRAVEN'S LAST HUNT is somewhat interesting. So is a profile of a (yet another) Kirby DC series KOBRA, which I had barely heard of. And there's the SECRET SOCIETY OF SUPER VILLAINS (which Mikey V. worked on begrudgingly) and something on Magneto's convoluted history which is a little snoozy but (I guess) necessary for all those X-fans out there.

Anyway, BI # 35 comes recommended, but it will no doubt pale to BACK ISSUE # 36, the MONSTERS issue, coming September 16, to which I contributed three stories to on STRANGE TALES' THE GOLEM, DR. THIRTEEN and TONY DeZUNIGA, co-creator of JONAH HEX (and GOLEM artist). Plus my partner-in-comics-zines-crime MR. JERRY BOYD threw down his VAMPIRELLA analysis. That should be a hot one! All wrapped and ribboned under a glorious EARL NOREM vintage painted cover of WEREWOLF BY NIGHT vs. MICHAEL MORBIUS THE LIVING VAMPIRE. Do you need yet another reason to pick up this issue? If you do, go see for yourself!
Posted by Greenblatt the Great! at 9:36 PM