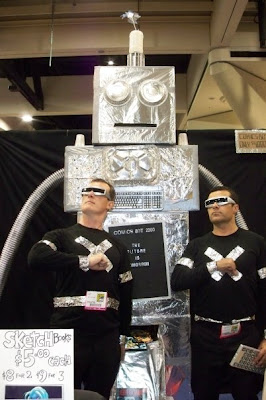 This year, drama came to Comic-Con....and the Abismo/Nerve Bomb booth brought it!

This sci-fi image, captured guerilla-style (using the same digital camera technology employed in the new movie DISTRICT 9) at San Diego Comic-Con International, clearly shows cartoonists RHODE MONTIJO and JAMIE BAKER minutes before they conquered Comic-Con wholesale with their Gort-like back-up. It was awful. Laser beams came out of Rhode and Jamie's visors, the giant robot walked through a table of back issue bins and knocked over a couple of spinner racks. Nothing was left in their wake (not even the cast of IRON MAN 2).

Rhode's an old pal of mine, the fantastic creator of the comic book series PABLO'S INFERNO (www.pablosinferno.com), co-creator of the HAPPY TREE FRIENDS cartoons, and the children's book CLOUD BOY. He came to San Diego to debut his latest comic book/children's book hybrid, SKELETOWN (http://www.pablosinferno.com/blog/?p=40). Baker, who we call "The Tim Tam Man," is a cartoonist who works in animation, most recently on Pixar's UP (www.james-baker.com). Every year, this duo with Bay Area roots tries to top their last Comic-Con guise. Past years have included powder blue jump suits and an ambitious used car dealership motif. This year, they went cosmic and blew the roof off the dump. Let's just say that it's a good thing TRANSFORMERS 2 plugged their crap last year, the Rhode Rho-bot would've kicked Bumblebee's electronic ass!

I dread imagining what they might do to top this next year. At this point, body-painting themselves blue and dressing like Smurs, or undergoing sex change operations just for a week will only elicit yawns from a jaded public. They've really raised the bar pretty damn high this time.

It's always great to hang out with Rhode and Baker. They're all about the wall-to-wall nonsense, which is the best you can ask for from cartoonist friends......although this year's Comic-Con was a comedy of errors just trying to hook up with everyone for dinners and parties.

Moments before Rhode and Jamie conquered Comic-Con, I ceded an El Santo-buckled belt to Rhode in a luchador ceremony that had lesser men running for the hills. It was devastating.
Posted by Greenblatt the Great! at 11:44 AM

ha ha... Michael, you are one funny man.

Okay, the 'one week sex change' suggestion really made me laugh, and contort with disgust!