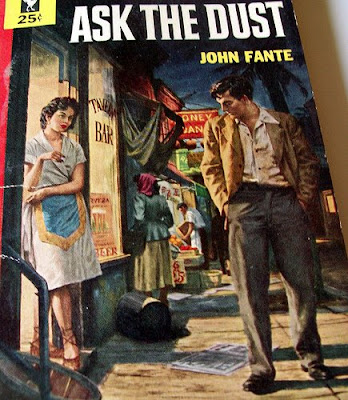 "Ask The Dust" is one of my all-time favorite novels and probably the quintessential book capturing pre-WWII Los Angeles. John Fante's writing is so brilliant, unfettered, and uncluttered, that when filmmaker Robert Towne (the screenwriter behind two of my favorite films, Hal Ashby's "The Last Detail" and "Chinatown") made his 2006 movie adaptation, he had no problem translating the book's plot points but totally missed Fante's heartbeat and humor (and the bad casting didn't help...not just the lead actors, but South Africa standing in for Los Angeles!)

On April 8th, 1909, John Fante came into this world, and by the time he left it in the early 1980s, he had left behind a finite but brilliant literary legacy which, thankfully, Charles Bukowski's cheerleading helped ignite a Fante revival. Thanks to Bukowski, a Santa Barbara-based small press reprinted Fante's out-of-print novels.

On the topic of John Fante, I'll have plans to craft a special article, which will be published in the Palisadian-Post in a few weeks from now. Once it's up, I'll be sure to link to it.

(By the way, as long as we're talking about bad casting, even the characters on the cover of this pulpy edition of "Ask The Dust" above is totally miscast. That waitress sure as hell ain't no rough-around-the-edges Latina!)

In the meantime, ciao for now, Arturo Bandini!

Somewhere out there, the little dog laughed....
Posted by Greenblatt the Great! at 12:11 AM

I love Fante... I avoided seeing the movie simply based on the casting alone....

I agree, Jamie. For the same reason, I've avoided, to this day, seeing the movie version of THE ROAD TO PERDITION. I thought, based on the graphic novel, that Tom Hanks was supremely miscast. I couldn't see him playing the gritty, angel of death hitman, and the ROAD graphic novel reads like a John Woo thriller, not a glossy Oscar-bait pic.

With ASK THE DUST, despite the bad casting and South African locations (!!), I was hoping the Robert Towne pedigree would've worked. CHINATOWN and Hal Ashby's THE LAST DETAIL are two of my favorite films. One of the movies he directed, WITHOUT LIMITS, about Prefontaine, was decent. Oh, well, so much for that theory!