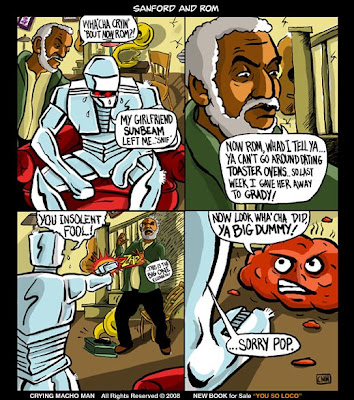 I’m happy to call CRYING MACHO MAN cartoonist Jose Cabrera one of my best friends. But even if I had never met the guy, he’d be my favorite contemporary humor cartoonist working today.
We have a lot in common: he’s my age, he’s originally from New York, he has telegenic good looks, he’s obsessed with humor comics, and he’s cruel to small children and animals (just kidding! …….He’s not THAT obsessed…).
Every epic romance has that initial encounter, and I met Jose in 2007, up at the Alternative Press Expo (APE) convention in San Francisco, when he was promoting his first collection of brilliant CRYING MACHO MAN Web strips, “Prime Cuts.” As it turned out, Jose was also based in Los Angeles. So we’ve been hanging out ever since like we’ve known each other since childhood.
Since then, Jose has put out another CMM collection, called “You So Loco,” and he and his acerbic wife Naomi are currently taking a break from L.A. life to spend a year living in Mexico. Another little known fact about Jose: he knows his way around a kitchen. His chefmaking skills have been the highlight of many a dinner party!
Of Dominican-American heritage, Jose is a flat-out hilarious cartoonist, often weaving street-smart, urban humor into his edgy postmodern MAD satire. See for yourself at www.CryingMachoMan.com, where you can get on Jose’s weekly humor-comic email list.

****You’re a humor cartoonist. So what is your holy trinity of humor comics? 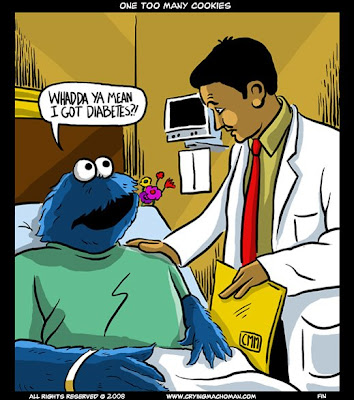 ****Which lame-ass 1970s Marvel Comics series was your guilty pleasure while growing up and why?

My guilty pleasure wasn't necessarily a Marvel comic but Archie Comics. I would sandwich them between Byrne's X-MEN and Romita's SPIDER-MAN as I left the small smoke/newspaper shop on 181st Broadway. I would slip into McDonalds next door and order me some Large fries, dousing them with catsup, and read ARCHIE from front to cover, timing it to the very last fry. ARCHIE was like comfort food, taking me out of the rough ghetto life of upper Washington Heights and transporting me to the homogenous town of Riverdale.

****What's the best thing about visiting and exploring Mexico, as you are currently doing?

Smashing piñatas. I'm really getting into these small western comics called "revistas vaquera" and the police mysteries "policiacas." They are as cheesy as all get out but they help me with my Spanish and I get to see the Mexican hero really give it to the gringo. 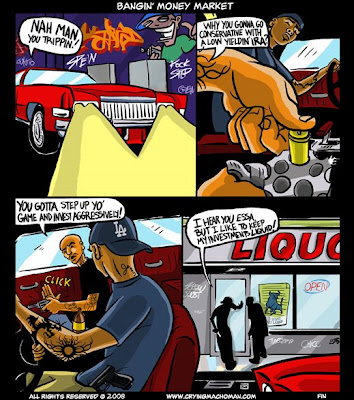 ****What part of the creative process of creating CRYING MACHO MAN strips do you enjoy the most?

I love drafting and inking the strips. It brings me a sense of purpose and I'm creating a strip a day. It's addictive and I get to share it with my fans.

Oh, yeah, and for further reading, I wrote about him at length last July for the Palisadian-Post, the weekly newspaper of record of Pacific Palisades, California:

Posted by Greenblatt the Great! at 9:59 AM