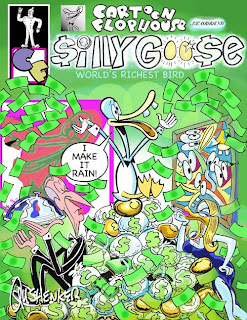 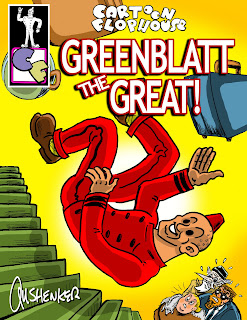 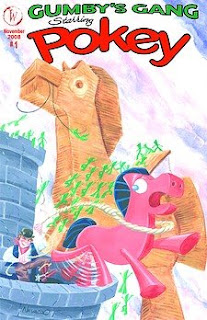 Greetings from humor cartoonist Michael Aushenker.
I've designated this day (my birthday) to kick-start my ongoing blog, where, on a weekly basis, I will post a CARTOON FLOPHOUSE comic strip every Friday morning (Pacific Coast time).
In-between the weekly comic strip postings, I will post all kinds of nonsense related to whatever's in the air at the moment, whether it's a review of a movie I just saw, perhaps a new CD I'm digging, and, of course, talk of other cartoonists, comics, and the occasional personal anecdotes. If I have some preliminary sketches or strips that I feel moved to share, I'll post those as well.
Beyond my MySpace blog at myspace.com/elgatocrimemangler, I've kind of resisted the idea of keeping a blog going, but I've finally caved in and jumped on the bandwagon, to see if it's any fun (for both me AND you). It's admittedly going to be somewhat of an experiment, especially at this early stage, but I'm going to give it a whirl to see if I can build a more direct connection with my fan base.
So where am I at, comics-wise, right now? Let me get you up to speed:
-- GUMBY'S GANG STARRING POKEY (WildCard Ink), the first issue of a new Gumby series featuring the solo adventures of supporting characters Pokey, Prickle, The Blockheads, and Goo that I wrote, is still stalling at the starting gate. I've seen the finished POKEY book,  it looks amazing, especially with Rafael Navarro and Lance Borden's stunning art. But the publishers are late getting the book out. I'm hoping to see it published by San Diego Comic-Con, but moreover, I'm hoping to see this puppy in print by the end of 2009! In this economy, where periodicals are dropping like flies (last month, we lost thousands of alt weekly comics pages, including Matt Groening's LIFE IN HELL, the local L.A. CityBeat, and my favorite music magazine, Blender [and I just renewed my subscription, too!]), expectations must be lowered.
-- CARTOON FLOPHOUSE FEATURING GREENBLATT THE GREAT! (Urban Golem) This is the annual book (48 pages of quasi-surreal gag strips about a bellhop and a cast of crackpots at the Hotel Rondovian) that I debut every APE convention in San Francisco. Issue No. 1 came out on Nov. 1st (see below for order information) while I'm currently putting the finishing touches on No. 2 and readying it for October 2009's APE con. Stay tuned on that one.
--SILLY GOOSE (Urban Golem) I've put out an all-ages comic book in the tradition of my children's books (such as GET THAT GOAT! [Landmark Editions]. It's about the world's richest bird. He's got a corner on the golden egg market. An eccentric for sure, he drives everyone around him nutso (this one's probably semi-autobiographical). Scroll down as well for the ordering information on that one.
Well, now that I've taken the wind out of everyone, it's high time I go and celebrate my birthday in high style this weekend. You know, the usual fast cars and b*tches. Nah, not my style. Actually, I might just cozy up with my copy of Alan Moore's "From Hell" at 11:00 P.M. and be fast asleep by 11:07 P.M.
Enjoy the weekend and looking forward to hearing from you whenever you get the chance to check in here.
Ciao for now,
MICHAEL AUSHENKER
Los Angeles, California
Posted by Greenblatt the Great! at 7:20 AM

Yours Truly, Number One Fan,
Laura

Happy B-day Aushenky! Looking forward to Weekly Flophouse... love your stuff, as ever.

it really very good.
I love it !