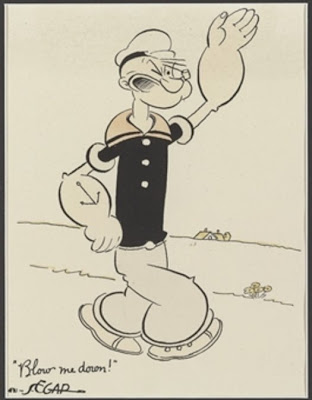 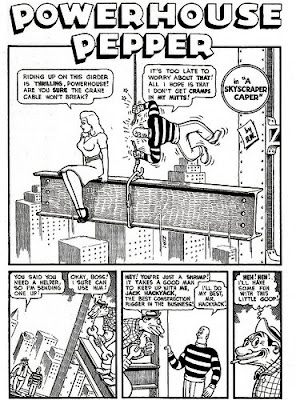 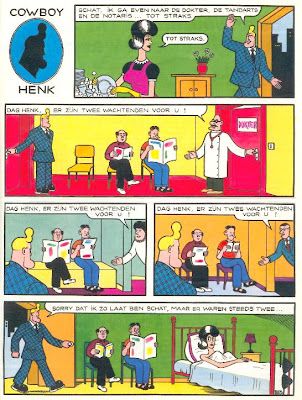 Every humor cartoonist worth his salt has a holy trinity of humor comics.

If a humor cartoonist tells you he/she has a holy quartet of humor comics, he's a f*cking liar! If he/she comes at you with, like, I've got an octonity of humor comics, he/she's a mess, because the word "octonity" doesn't even exist.

Actually, my humor are probably more influenced by animation than humor comics, but since this posting is about the Holy Trinity of Humor Comics, that has nothing to do with this entry's topic.

Ah, mais oui it does! Because the Fleischer POPEYE cartoons probably had more of an impact on me than even the Segar strips, as brilliant as those are. I love the rhythms of Segars strips, the repetition from strip to strip, and the way Popeye evolved into a lead character. But the Fleischers fleshed him out, and added an array of entertaining song numbers into the mix, such as "We Aims to Please," "Clean Shaven Man," "Brotherly Love," "Barnacle Bill the Sailor" and many more (I'm surprised Rhino Records never compiled those songs on a CD. Indie label be asleep at the wheel?) Plus, the Fleischer cartoons amped up the Popeye/spinach relationship and the Wimpy/hamburger fetish.

POWERHOUSE PEPPER is kind of Wolverton's knock-off on Popeye, but that's OK, because in his "Powerhouse Pepper" strips, Wolverton demonstrated some of the best character designs in comics. And the whole rhyme-scheme dialogue is insane. There's a really good Fantagraphics book that collects all the Powerhouse strips.

COWBOY HENK was a slow burn, then a fast burn, then a slow burn again. See, I first read Kamagurka and Seele's gag strips, (featuring a cow-licked grown-up and demented Tintin type who is too vulgar to be mistaken with fellow Belgian Herge's boy reporter) in some of art spiegelman's RAW collections and I wasn't overly impressed. They were not the best samples of the strip. Then in 1991, while living in Paris post-college, I read the adventures of Cowboy Henk (renamed Cowboy Jean for French folks) in the pages of PSIKOPAT, a French humor anthology that I'd buy in the kiosks of my 19th arrondissement neighborhood. That was the tits! Some of the funniest gag strips I've ever read. Back in the States, I found a "Cowboy Henk" collection put out by (once again) Fantagraphics. Unfortunately, the collected and translated strips were overall lackluster. Sigh. So frustrating. Maybe Cowboy Henk is best left Cowboy Jean!

If any cartoonists out there have their holy trinity of humor comics, I'd like to hear about them. And to those punks with the holy quintet of humor comics, get out of here! Scram! Beat it!
Posted by Greenblatt the Great! at 6:15 PM

I recently came accross your blog and have been reading along. I thought I would leave my first comment. I don't know what to say except that I have enjoyed reading. Nice blog. I will keep visiting this blog very often.

Thanks, Tessa (or Ruth),

Feel free to join up as a "follower" (so condescending of Blogspot, eh?) and keep tuning in. I'm lining up some great weekly Q and A's with cartoon industry folk, in addition to my weekly comic strip posts.

And thanks for sharing the recipes, although I'm too stuffed right now on matzoh and gefilte fish to think of food.

The Cartoon technology is really amazing specially because nowadays there are new alternative in the animation of every cartoon, I love it because I usually want to know how was created every cartoon.. I always enjoy read, know, or discover new things every day actually once i found costa rica investment opportunities an interesting webside . which present something different. All new things usually catch my attention.

Sorry Greenblatt, but Tessa/Ruth is not a real patron of your blog... that was an automated post meant to get the "muffins" link higher in search engine ranking. :\