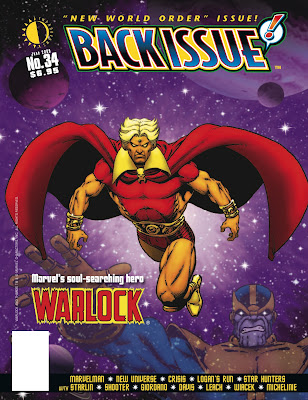 With these kind of comic-book nostalgia magazines, they often ride or die by the theme they're covering....well, some themes are meant to be roundly ignored, but the just-released BACK ISSUE! # 34 is a very fun ride.

The theme is BRAVE NEW WORLD...it's all about the futureshock series released during the Bronze Age. And as the great, complex and somewhat groundbreaking DEATHLOK THE DEMOLISHER has been already covered way back in BACK ISSUE! # 25 (by me, as it turns out...), the "Men of Steel" issue, what informs this issue is a bunch of fun articles on Marvel's short-lived LOGAN'S RUN series (a good article which features insightful commentary from LOGAN'S RUN co-novelist William Nolan on the behind-the-scenes on the translation of his work from book to screen and to comics), Jim Shooter's THE NEW UNIVERSE (interesting not so much for the content but for how this new direction at Marvel imploded), and, my personal favorite from the issue, an interview with Shooter on his early days coming aboard Marvel (not exactly futureshock sci-fi, but I guess he was shocked about his future there!). There's also a good piece on the inker on Marvel's STAR WARS series, but noticeably absent (it's being saved for a future issue, I believe) is Marvel's BATTLESTAR GALACTICA series (the show is currently on my mind because I've just begun enjoying the Sci-Fi channel's clever remake of the futureschlocky TV series on DVD).

Well, these are my personal highlights and I haven't even read through the cover attraction yet on Jim Starlin's WARLOCK. Highly-recommended....by Michael Aushenker the BACK ISSUE! reader this time (no article in this one...my next BACK ISSUE! piece does not appear until # 35 in July--a brisk chat with artist MIKE VOSBURG).

For more information on BACK ISSUE! magazine, visit TwoMorrows.com.
Posted by Greenblatt the Great! at 4:43 AM

Yeah, I just read about it. LOGAN'S WORLD, right? I'm guessing it's based on the second novel...?

I'm not sure about the Bluewater version, but it'd be cool to see a really good black and white LOGAN'S comic, with beautiful painted covers a la the old tradition of THE PHANTOM comics.

I know they've been trying to remake LOGAN'S RUN as a feature film since the mid-1990s. This movie falls into the BATTLESTAR GALACTICA territory for me. The original movie was cheesy fun, kind of borderline good/bad, but the concepts were great.

If they can do a really smart remake of it, it might be worthwhile and might benefit from a newer, better model, and not be a sacrilegious move (like trying to remake BLADE RUNNER or the original STAR WARS....or even the original PLANET OF THE APES! Shame on Tim Burton!).