THE INTERNET: More harm than good? 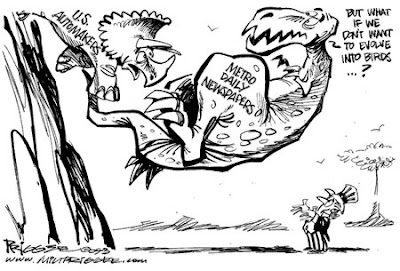 Found this quote below online today:

“Now that newspapers are failing, circulation is dropping, editors are cutting expenses anywhere they can, and prices for editorial cartoons couldn’t fall any lower, the future looks even bleaker for political cartoonists. A few years ago it looked like the Internet would be our salvation. There are some Web sites that are good customers, but sales to the Web have turned out to be a disappointment. There is no culture of paying for content on the Web. Advertising with content on the Internet pays a pittance. The Web is a dud.”
- Daryl Cagle

Coincidentally, this cartoonist summed up my feelings on a conversation I was just having yesterday....and seem to be having a lot in few years, as it becomes apparent that few people have figured out how to monetize the Web.

Meanwhile, the immediacy of the Internet, and the sense of entitlement among most users that they can get anything for free on it, continues to cheapen many professions, who will not get compensated at all or nearly as much as they would in traditional media. Outside of editorial cartoonists, you can say ditto for many other professions, including reporters, editors, illustrators, photographers, film/TV makers, musicians and many more. All of the product they do can be posted for little compensation and/or swiped once online. It's kind of part of what was at the heart of the debate that led to the recent WGA strike (and I'm still unclear if the writers got anything substantial out of that settlement).

In related matters, as newspapers die off, what exactly will replace them online as a respectable institution where the news reported can be generally trusted (not talking blogs here...)?
Posted by Greenblatt the Great! at 12:12 PM