Another great cover: ROCKY AND HIS FRIENDS! 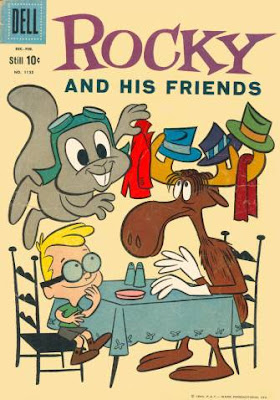 Some of the best covers---clean and simple, with clever color and character design-- come from the world of ha-ha comics. Harvey Comics is good for a mess of them, I posted a punch-drunk pink Magilla Gorilla cover a few months back, and this ROCKY & BULLWINKLE comic is another fine example of funny-book gold.
Back in the late '80s, I befriended Bullwinkle creator JAY WARD. It was one of the highlights of my teens. Ward and his team of writers and voice artists, including writer/Bullwinkle voice Bill Scott, were  masters of cartoons, and stuff like ROCKY & HIS FRIENDS, SUPERCHICKEN and GEORGE OF THE JUNGLE were among the funniest, wittiest cartoons ever created.
So it was quite a treat to be able to rap with the Walt Disney of TV toons at his dearly departed Dudley Do-Right Emporium, his Sunset Blvd. store of Bullwinkle merch, which miraculously lasted into the 2000s before becoming a taco joint.
Anyway, never read this book, but the cover is promising, especially with Sherman (where are you, Mr. Peabody?) thrown into the mix. The funky colors, the colorful characters, the cheap gag, the dorky miscoloring of Sherman's hair (should be Archie orange)... it just brings a smile to your face. Hi-five!
Posted by Greenblatt the Great! at 8:11 PM

Great COVER! I want this book!

Yeah, Mike, this is a great cover. I agree with you about the classic clean line cartoons from the old days. Slick line work like this, on simplified cartoon characters, is really appealing.

Thanks, Will and Jav!

Will, I don't own this book myself, found the image online. I'm with you on this one, though. Would love to find a copy.

TV animated cartoons have kind of lost their charm. I think SPONGEBOB is perhaps the closest descendant to the Jay Ward/Hanna-Barbara toons, I can't think of much else.

Many toons are hopped up on manga-ish character designs and MTV-speed editing. Just a sign o' the times, I guess. As Ted Seko might say: "And that's the name of that toon..."