A Tribute to Peter Graves of Pacific Palisades, CA 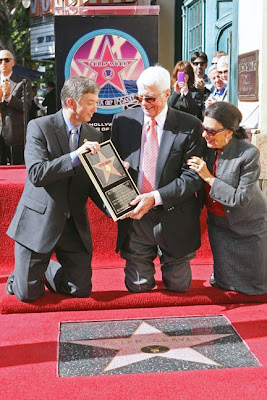 Just heard word tonight that one of our biggest Palisadians has passed away: the actor Peter Graves.
Of late, I've been doing a lot of writing about the star of "Mission: Impossible" and "Night of the Hunter," as Peter was the subject of several recent tributes. I had the pleasure of attending his Hollywood Walk of Fame ceremony and the ensuing party at Musso & Frank's in Hollywood on October 30, 2009 (on my girlfriend's big birthday, no less!). And a week prior, I got to rap with Peter about some lesser chronicled movie roles for this article.
My condolences to his terrific wife, Joanie, who is truly one of Pacific Palisades' shining lights.
Posted by Greenblatt the Great! at 7:40 PM

I'm very saddened by the news I just heard...I didn't know Mr. Graves personally, but feel as though I did. He will be greatly missed by many.

Thanks for the memories, Jim Newton.