BACK ISSUE #39 BONUS CUT: David Chelsea on WELCOME TO THE ZONE

BACK ISSUE! magazine #39 ----an "April Fool's" issue that is mostly devoted to independent/humor comics fare such as the great REID FLEMING, WORLD'S TOUGHEST MILKMAN by David Boswell, Bob Burden's FLAMING CARROT, and stuff like Fred Hembeck and MAD Magazine ---- dropped in stores and online this week. It's a terrific issue and an overall refreshing respite from the usual Marvel/DC stuff that dominates the comics industry. 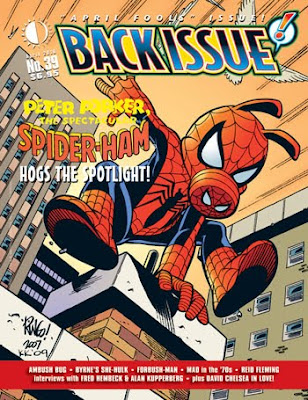 My major contribution to this issue is an in-depth interview with DAVID CHELSEA, the cartoonist behind DAVID CHELSEA IN LOVE, which emerged in the early '90s on Eclipse. 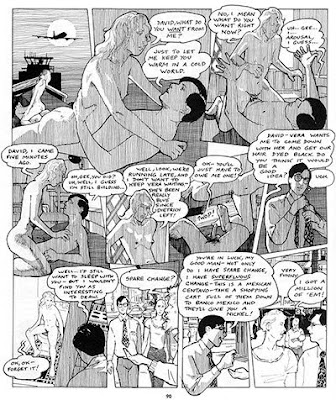 Piggy-backing on that interview, I wrote up a sidebar on WELCOME TO THE ZONE, Chelsea's surreal follow-up which, for various reasons, could not be shoehorned into this issue. 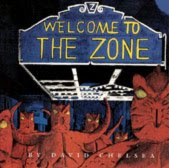 As a result, I'm running the discussion here as a bonus cut. Below is an up-close discussion with David Chelsea on his mid-1990s book, WELCOME TO THE ZONE. 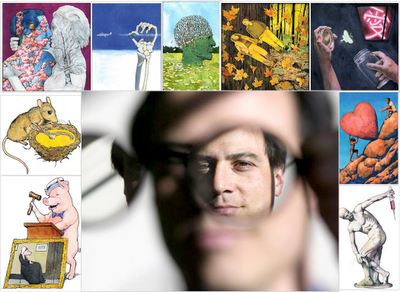 AUSHENKER: Can you give me a context for the bohemian milieu you're skewering in Welcome to the Zone? There seems to be a lot of commentary on class difference (the homeless, Ronald Duck) and the artist characters' warped values, toxic relationships, and desperation for success. Was there a hypocrisy or an agenda to that scene that you found oppressive? Are any of the characters, such as Tasha Tigerbaum, Invert and Meta, Mushroom, and Mugg based on specific people from your New York period?

CHELSEA: The bohemian milieu is based on a couple of overlapping scenes that I had been part of in the mid- to late-80s. There was a poetry and performance scene that centered on a Lower East Side club called ABC No Rio, and there was a loose group of singer-songwriters who called themselves the Anti-Folk movement. They considered themselves rebels against the old-fashioned folk-singing scene that centered on Folk City in the West Village, which itself was pretty marginal by the ‘80s. There was a lot of terribly radical politics and identification with the oppressed and the homeless in that scene, which struck me as hypocritical given that so many of those people were educated, white and middle-class, and that their presence in the neighborhood was helping to further the gentrification they railed against. A lot of the performance and folksinger characters are based on people I knew––the guy gluing up posters is John S. Hall, lead singer of King Missile. Tasha Tigerbaum is a poet named Eve Teitlebaum, Lunch is a folksinger named Lach, etc. The plotline about the guy who cooks his girlfriend was based on a case that actually happened, an East Village activist named Daniel Rakowitz who killed his dancer girlfriend, put her in the soup, and fed her to the homeless. I think the book would have been better if I'd stuck to what I knew, but I was aspiring to do a big multi-leveled portrayal of a whole society like Robert Altman's “Nashville” or John Sayle's “City Of Hope,” so I had to include elements l knew nothing about, like the cops and the developer based on Donald Trump. For those, I resorted to pretty stock caricature. The whole science fiction and fantasy element was my effort to entice the mainstream comics reader, and that sure didn't work.

AUSHENKER: This book, more than David Chelsea in Love, seems to be equal part McCay fantasy, equal part Drew Freidman influence, with the pointilism and the parodies of Donald Trump and Jack Webb’s Joe Friday character. The cover has an almost Maurice Sendak feel to it. Were you consciously attempting to push the envelope on your style, pushing the surreal factor, and distance this project visually- and narrative-wise from DCiL?

CHELSEA: Mostly, I wanted to explore the more tonal stipple style that I had started to experiment with in DCiL. Of course, that turned out to be far more labor-intensive, and l was back to the clear line style with Perspective!

AUSHENKER: Was Zone more liberating to create than DCiL? Did you feel with DCiL kind of a slave to your personal history, whereas this is a madcap surreal romp?

CHELSEA: You know, if Zone had been a wild success, l might feel differently, but I regard this one as a misfire on just about every level, right down to my choice of a square format, which pretty much guaranteed low sales. What I remember is that l didn't want to do a direct follow-up to DCiL, but I didn't have any other stories l felt as passionate about, so instead l tried to sell out and do something that might be commercial. l know, my idea of what was commercial was pretty warped, but my thought was: comics readers enjoy space aliens and skeletons and lots of mayhem, so I'll throw all that stuff in!

AUSHENKER: You appear once again in the form of David Chutney....you appear in both DCiL and in Perspective!, and Mugg returns for the latter. How important is it to your iconography as a cartoonist to repeat certain motifs and characters as a common thread in your work? Or did this occur unconsciously?

CHELSEA: Basically, I hate coming up with new characters, so if l find one I like drawing, I'll stick with it if l can. Little by little, I'm starting to build a stock company.

AUSHENKER: On the back cover author's photo, there seems to be a collection of statuettes based on the characters in Zone. What was that all about? Was there push to merchandise those characters?

CHELSEA: That was my favorite part of working on the book. I had made little plasticine heads of the major characters in DCiL, not very elaborate, bald and earless busts, and I found them a great help in keeping the characters looking consistent throughout the book. For Zone, which has two dozen major characters, I got much more involved, constructing full-torso models with hair and teeth and eyes, in some cases from baked plastic clay, but mostly from plasticine. These I used as drawing reference, and they were a big help in giving the artwork a three-dimensional look and especially in setting up lighting effects. I believe Richard Corben does something similar. A bit more effort on the script would have been a good idea too, but I think I always knew the story was never going to mean as much to me as DCiL, so it needed all the help from the artwork it could get.

AUSHENKER: I remember you mentioned that Eclipse was not interested in publishing Zone following DCiL. What was it like to work on a project for Denis Kitchen and Kitchen Sink (right before it went under)? Was this a positive, supportive experience? Did they let you execute Zone the way you intended or did they give you any input that shaped the final product?

CHELSEA: Kitchen Sink had just absorbed Tundra and there was a lot of reckless expansion going on. Ultimately, it all proved too much to handle and the company went under shortly after Zone was published. My book was lost in the shuffle, I think higher-profile projects that originated at Tundra were sucking up all the oxygen. I had three editors over the course of the time I was working on Zone, and I don't remember any editorial input at all, but l believe that's the norm with the independent companies. I remember having lunch with some Kitchen Sink promo guys and Carol Lay about that time. The Kitchen Sink people were telling Carol about some publicity stuff they had planned for her book. I blurted out, ‘What do you have in mind for my book?' There was a moment's silence and then everyone burst out laughing.

Posted by Greenblatt the Great! at 7:55 PM