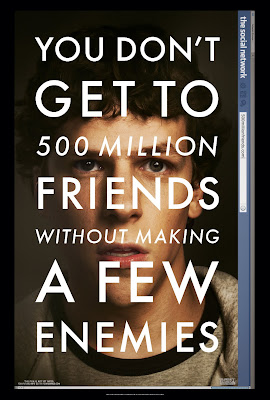 I saw THE SOCIAL NETWORK last night and I really enjoyed it. The actors were solid, Jesse Eisenberg's on a roll after his fun performance in ZOMBIELAND (have yet to see ADVENTURELAND), Justin Timberlake essentially plays himself and he's good, too. I have to re-assess my opinion of Andrew Garfield now. He was so good as Eduardo it makes me think that perhaps he could do a good Peter Parker (even if he's not exactly the physical match). Bill Gates actually does play himself and he's brilliant! Oh, and I dug the perfectly moody and sick Trent Reznor soundtrack, but then again, I was a big NINE INCH NAILS fan back in the day (before the last two albums). It kind of sounds like excerpts from THE FRAGILE, my personal favorite NIN album (disk 1). Dark, brooding and slick, Trent Reznor is like the musical equivalent of David Fincher, ain't he, doc?
This is a good follow-up for ZODIAC from Fincher, and in a way, this movie is a companion piece to another movie about a Jewish wiseguy who derails called SHATTERED GLASS (2003), although, IMHO, overall, SHATTERED GLASS is the better of the two.
If they ever make a movie about the dicks who cooked up Twitter, they'll be lucky if it's as good as SOCIAL NETWORK.
(By the way, I threw in "IMHO" to make it sound more Facebook-y. Did it work?)
Posted by Greenblatt the Great! at 11:16 PM