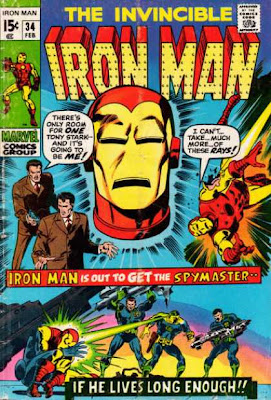 Sunday night, I picked up SAL BUSCEMA: FAST & FURIOUS ARTIST (TwoMorrows.com) and it's a fun read about one of Marvel's most underrated artists. Big brother John Buscema gets a lot of deserved acclaim, he was king of the Conan artists, but there's something really fun about Sal's art. Unlike John, who famously despised drawing superheroes, Sal loved working on them, and that probably shows.
Some of my favorite Sal work is his classic Hulk stuff, his Captain America run with Steve Englehart, and, of course, stuff like MARVEL TEAM UP and PETER PARKER, SPECTACULAR SPIDER-MAN.
And then there's this, one of my all-time favorite covers, from IRON MAN #34. If this action-packed cover doesn't make you pick up IRON MAN comics, which will? It's out of control! (It should be worth noting that the Stark vs. Stark leitmotif is straight outta THE DOUBLE MAN starring Yul Brynner....and Yul Brynner, one of my all-time favorite films!)
Posted by Greenblatt the Great! at 12:30 PM

Sal's work on ROM was great stuff. when he left the artwork really suffered