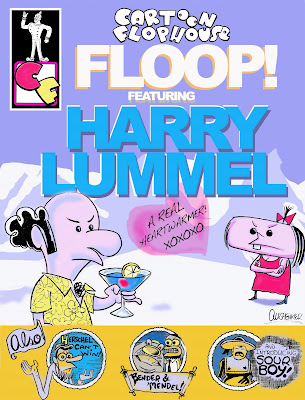 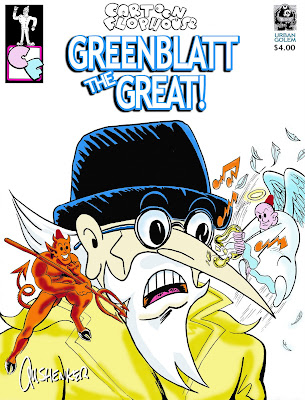 Calling all Flophousers in the Bay Area! ALTERNATIVE PRESS EXPO (APE) is upon us next weekend.
Just a reminder: come on down to the CARTOON FLOPHOUSE/CRYING MACHO MAN table next weekend where I'll be busting a move with my partner in humor comics crime, JOSE CABRERA. I'll have the above new comics on hand, plus copies of GUMBY'S GANG STARRING POKEY if all goes well.
This year's APE should be an especially magical show as a bunch of homies from LA are going up to sell their wares: Jose will have brand new CRYING MACHO MAN magazines, JAVIER HERNANDEZ of EL MUERTO, AZTEC ZOMBIE legend (LOS COMEX), Ghettomation guy animator JIM LUJAN, GRASIELA RODRIGUEZ, who will debut her LUNATIC FRINGE comic there, RICH CARRADINE of GHOULA.org (selling THE PARK AFTER DARK and the brand new GHOULA COMICS #1, which will include stories from Javier, Jose and myself).
Stop by APE, it's still a great convention where you can discover a lot of talented new artists and great new comics, and converse with the cartoonists as well. It's a big show, yet not San Diego big where everything's a big blur. Worth a visit for sure!
Posted by Greenblatt the Great! at 9:59 AM