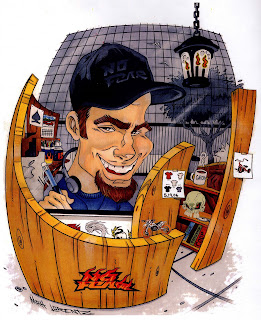 Surf’s up, moondogs, it’s Matt Lorentz!
I first met Matt when my buddy Dean LeCrone was president of the Southern California Cartoonist Society (SCCS), http://www.sccs-online.org/, kind of San Diego equivalent of CAPS up here in the L.A. area. Mean Dean invited me to speak to the SCCS group at the Broken Yolk in Pacific Beach in the early 2000s. Right after my appearance, I joined the group. Lorentz followed LeCrone as SCCS prez. The SCCS are a fun bunch, and until his death in 2007, Paul Norris was a member. And get this, the Aquaman creator lived in, of all places, Oceanside. That’s like Steve Ditko living in Spider City, New York or something…
Matt’s a terrific guy who’s always ready to share a laugh or two. And he’s crazy-talented. Matt recently moved to Orange County from his native San Diego, and if I don’t see him at Comic-Con, we meet up in L.A. in December for the annual NCS luncheon.
Matt nutshell’s his career in his own words:
“Since 2001, I have worked as an illustrator for the action sports industry having created over 65 character driven graphics for Tony Hawk's Quiksilver line, Hawk Clothing. Other clients include Reef, Local Motion, Quiksilver Edition/Quiksilver Premium, G&S, Crazy Shirts, Ron Jon Surf Shop, SoCal, and No Fear. I also create skate graphics for Steve Steadham Industries and Mike McGill's signature Airspeed models. My art has been featured in Concrete Wave and Exaggerated Features magazines, The Light Gallery, The Huntington Beach Art Center, X-Games XXII, and the Quiksilver Foundation Artists' Showcase. I am a member of the National Cartoonists Society and the National Caricaturists Network.”
Visit http://www.myspace.com/mattlorentz 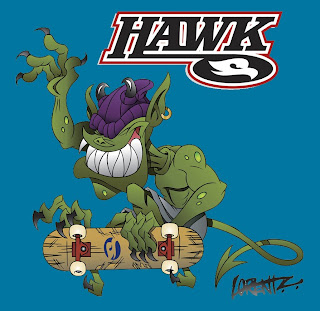 ****Can you please share with us your anecdote of how you first ran into Tony Hawk?

When I started skating as a kid, like all skaters at the time, I was well aware of Tony and the rest of the Bones Brigade. I also create skate deck graphics for Mike McGill and Steve Steadham. It's always fun and an honor to create art for all three of them.
Back when I first submitted my portfolio and concept sketches to Hawk Clothing, they called and asked for t-shirt designs of five animal characters skating. I spent the whole next day gathering skate photo reference and designed the whole set. I was stoked on this project, as this was the highest profile gig I’d had up until this point and the tees were to be sold worldwide.
Later that night, while at a restaurant in Pacific Beach, my friends told me Tony Hawk was there. I thought they were kidding. I talked to him about skate art and what type of designs he liked best. It was surreal that out of everyone at Hawk, the first one who I met in person was the legend himself.

••••Who are the cartoonists/illustrators, living or dead, whom you admire the most and why?

For me, Bill Watterson is hands down the greatest cartoonist of all time. The wit, expressions, and range of art styles he gave those characters made them really come to life. That comic is timeless, too.
Working in the surf/skate realm, I look to the legendary Rick Griffin, Rick Rietveld, Jim Phillips (Santa Cruz Skateboards), and VCJ (Powell Peralta). All four are prolific and pioneering.
Early on, I was influenced by animation and always liked the art of Glen Keane and old school Disney artist Fred Moore for the action and personality of their drawings. Gene Hazelton, the great Disney/Warner Bros./Hanna Barbera character designer (and former SCCS member), was my mentor and a genius as well.
Frank Frazetta, Sebastian Krugger, Peter De Seve, and J. Scott Campbell are inspirations, too. Of all the artists though, Chuck Jones has probably been the biggest influence on my designs throughout my time at the drawing table. My Hawk art might be described as Warner Bros. by way of ‘80s skate deck art. 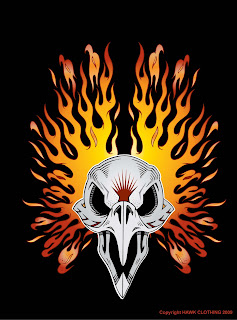 ****What's the most fun to draw and design: demented monsters, demented robots, or demented animal characters? 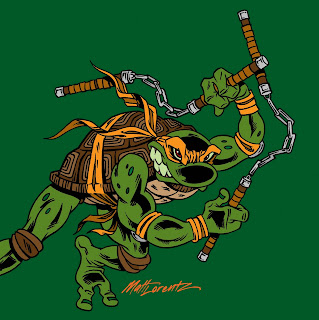 ****Do you actually surf or skate?

I surf, skate, and snowboard too. I wear a wrist guard on my drawing hand though when I skate and snowboard!
Posted by Greenblatt the Great! at 12:12 PM

A great artist and a great person. Matt, hope to be able to sit down with you these days for a couple of drinks and share art and work projects with some of our other fellow artists!

Matt is one of my most favorite people in the whole damn world. He once tried to make out with me at a Pearl Jam concert.

Are you sure, Yungster? Maybe you were so drunk, you're not remembering the details very clearly....


.....For instance, it might've been a Backstreet Boys concert! (That's OK, I wouldn't admit that either).

Matt is a true artist with so much talent. His energy is infectious and rubs off on everyone around him! Matt Loretnz is one amazing person who I am lucky to know and call a friend!

Many thanks for all the kind words.
Yeah, Yung WAS drunk after that ONE beer. Now I don't feel so bad about the rum filled water bottle incident at Del Mar Race Track, where he chugged a ton thinking it was high quality H2O.

Haha! Matt's interview is a lightning rod of controversy!

I agree, Matt is one of the coolest cats out there. He's a great guy and a great artist.

Thanks again, Matt, for the interview!

Matt! Your so awesome!
I love those skateclothing designs of yours.

Hey man....I also so some stuff for kohl's Tony hawk!