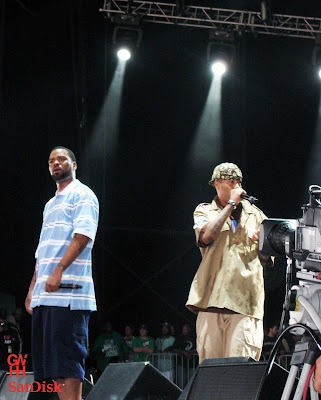 Redman/Method Man's BLACKOUT 2 should've been titled "Knockout 2." They've done it again. It came out this week and it's out of control, just like it's predecessor. It's a stag party on CD, I'm digging this album already.

It may not measure up 100 percent to the original classic, 1999's BLACKOUT, but it doesn't need to because this is where they're at right now and it's sounding pretty good to me. Especially tracks like # 14 with Ghostface Killah and the robot voices. The fourth track sampling Li'l Jon's fun, too.

Somewhere along the line, many a critic has shorthanded Red and Mef as the Cheech and Chong of rap, and if this album has one shortcoming, it might be that these days, the pair's rhapsodies to toking up seem a bit forced and obligatory, as if expected (the same kind of thing plagued Cypress Hill by their second album). But if you can get past the obsession with marijuana (I'm not a pothead and I can), a Redman/Method Man album, musically and lyrically, is the most fun you'll find in the world of hip hop in the last decade or so. These two are so witty and clever, and there's a logic in their wordplay even when they get surreal. On past albums, they've even paid tribute to Marvel and DC comics....Tical has assumed the alias of Johnny Blaze the Ghost Rider, while Redman has cut quite a few tracks parodying Superman, so between the two, they've got the Big Two covered.

On BLACKOUT 2, Method Man, as if to prove that this album came out in the 21st century, makes some funny references to Hurricane Katrina and Google, while Redman gets a good metaphor in utilizing Ferraris. References to Run-DMC and Jam Master Jay sweeten the pot, and the production is overall pretty suh-weeeeet!

I'm happy to hear Red and Mef together again for the first time really since the awesome HOW HIGH soundtrack. I saw Redman in March 2007 at the HOB on Sunset (same venue I saw Run-DMC in the early 2000s shortly before Jam Master Jason Mizell's unfortunate assassination) touring under RED GONE WILD. That was a fun concert. But this album's overall way better than RED GONE WILD, which, aside from the standout title track (produced by Timbaland) and a couple other songs, doesn't have the consistency of the BLACKOUT albums. Redman and Method Man are definitely at their best when making albums together --they raise each other's game---and I'm looking forward to seeing the two of them tour behind this one. Should be fun. BLACKOUT 2 is deeper than Atlantis!
Posted by Greenblatt the Great! at 7:29 PM

thanks for level headed review--I agree 100% with everything you say here. Let's hope they take it up a level in the coming year.