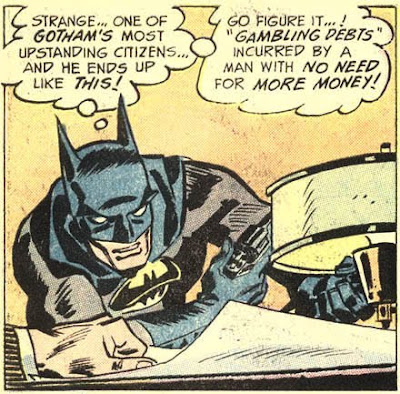 As much as I love the art of FRANK ROBBINS, I do not own every single issue he drew and/or wrote. So I just came across DETECTIVE COMICS # 426, in which three out of four stories were written by Robbins and two stories were drawn by him, and all I can say is that this issue has the most insane Batman story I've ever read....and the Joker doesn't even make a cameo!

The splash page begins with Batman, in full costume, weeping as he scrawls his suicide note to Robin, Batgirl and Superman (sorry, Alfred), with a .38 special sitting nearby on his desk. As always, it's one of those deceptive splash pages. Batman is not depressed. The issue actually involves a scheme that forces people into games of Russian Roulette. This story has "Art and Story by Frank Robbins." As does the next Batman story, in which he breaks into jail!

Needless to say, the art rocks. I love the way Robbins inks his work. And even the throwaway Batgirl piece by Robbins is drawn by Don Heck (as in IRON MAN) and the nonsensical Elongated Man (oy!) piece is beautifully rendered by Dick Giordano. If every issue of Batman were this much fun, I would have been the biggest Batman fan of all time. I'm not. But I'm definitely a diehard Robbins fan!

By the way, I don't know how the cover of the book (let alone the story) made it past the Comics Code people, but Robbins was a genius to push this story through without getting fired. I'd love to know the back story on this baby! WTF!!! 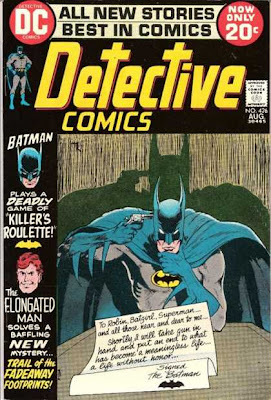 I gotta get that one!