Dr. Fate is bad-ass...and who the hell is Star Girl? 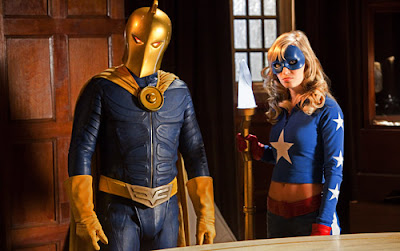 Among my circle of friends (OK, just among me), we are looking forward to the Jan. 22 premiere of SMALLVILLE with its promise of delivering the Justice Society IN FULL COSTUME.

In fact, it's the only episode of SMALLVILLE I've ever looked forward to. This will be only the second or third episode of this show I will sit through, as I never cared for the out-of-costume teen drama schtick on this show.

But with commercials and photos online touting The Sandman, Dr. Fate, Hawkman and (I believe) Green Lantern and Green Arrow IN FULL COSTUME, I am there faster than Barry Allen racing Wally West!

I look forward to the sheer ridiculousness of this episode, I'm guessing there'll be something very awkward about the characters as presented on this show's low budget. Not sure who Star Girl is, don't even know if that's really from the comics, but hopefully she won't get in the way. One way or another, this should be a doozy!

If it's not a budget-buster, can I request Aquaman vs. Black Manta for a future episode?
Posted by Greenblatt the Great! at 3:28 PM