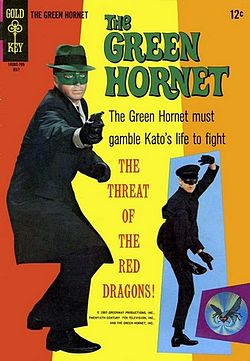 Seth Rogen (left) and Jay Chou (right)
Hot on the heels of seeing GREEN LANTERN in the theaters, I'm reminded about how relative disappointing superhero flicks are....watching GREEN HORNET on DVD. Wow, is HORNET a stinker... I'll take GREEN LANTERN any day over this shit sandwich!
Disappointment is the wrong word in HORNET's case as I had zero to sub-zero expectations for this enterprise (but now that it's on DVD, I thought, what the heck, I'd take a gander): Rogen is physically miscast in this role as is the film's arthouse director. Rogen doesn't appear superheroic but more buffoonish, like he crashed the set from the sequel to PINEAPPLE EXPRESS (an overall fun film, by the way). This hero-with-father-issues business is old hat (so old that the 1930s Green Hornet wouldn't wear it). Century City hasn't been this exploited in a film since CONQUEST OF THE PLANET OF THE APES. Storylines that feature plot twists that hinge on typing up a storm on a computer are cheesy. (Green Lantern had a scene like that with jet plane missiles, and that was the most bogus scene since any from SUPERMAN IV: QUEST FOR PEACE.)
With GREEN HORNET, I can see that they're going for a comedic superhero film but the dialogue here is not good silly, like absurd, but just cloying. The film constantly pokes fun of the very things that make GREEN HORNET, disrespecting the Shadow-esque source material that I'm guessing only older people would care about to begin with. Also, shoehorning this 1930s property into a contemporary storyline is awkward. It's obviously set in modern times but there's a patina of some kind of period film on it.
The screenplay is all over the map. The tone goes from humor to action to sentimentality so abruptly like it wants to be three different films. Also, the soundtrack pathetically shorthands what it wishes you would feel in any given scene (although these songs come on the soundtrack so quickly, it feels forced and MTV-cheesy). For example, when Brett's father dies in the film, cut to a quick snippet of Johnny Cash's "I Hung My Head," then abruptly cut to some upbeat song as the scene changes, then something else. It's so artificial, it adds another pathetic layer to this enterprise. It's a desperate attempt to evoke emotions that are not coming from the acting or writing (IMO).
Yeah, and the self-parody shtick is annoying. If they really hate GREEN HORNET that much and think the whole thing is goofy, why make this film to begin with? For a thousand reasons, this movie is a mess.
Seriously, if they're going to update the Green Hornet already, just cast an Asian-AMERICAN in the Kato role so we can understand what the fuck he's saying. If I were a studio head and I got the footage back and was forced to listen to this junk coming out of Jay Chou's mouth, I'd be pissing in my pants over the wasted millions. Same with those horrible RUSH HOUR movies where you have to sit through Jackie Chan's garbled pigeon English. Who can sit through that shit? It's 2011, they can get rid of the ching-chong Asian crap. For the sake of clarity, that's one GREEN HORNET rule they should update and goddamn fix so that we don't have to wince every time Kato speaks. It's totally annoying and it takes you out of the story.
The worst part of this film is that I can't understand a damn word Jay Chou says and, unfortunately, I can understand every word Rogen says. Hipping him up by having him croaking some hip hop lingo and rapping along to "Gangsta's Paradise" is kind of sad. The Matrix bullet-motion and Batman score steals don't help.
Christoph Waltz as the insecure crime boss basically strives to undo the brilliance he shone unto INGLOURIOUS BASTERDS as Landa with the clutch stuck on 3 in reverse. He's amazingly bad in this movie. Cameron Diaz, not Christoph Waltz, is the true villain of this film with her shrill screaming and lack of any good lines.
There's even a scene where Britt Reid and Kato fight each other, like in those PINK PANTHER comedies where Inspector Clouseau fights his Kato sidekick (maybe the filmmaker got the two enterprises mixed up).
This film is lighter and easier on the eyes than THE SPIRIT, an even lower form of domino-mask wearing superhero-film lifeform that this one superficially resembles. But this mix of superhero action and comedy and schmaltzy sincerity and Cameron Diaz just doesn't gel. Even the animated end titles are pretty lame.
Amazingly, (and unlike THE SPIRIT), this crazy project made its money back (not counting marketing) with a worldwide gross of more nearly $230 million. That's a true WTF! I just hope that doesn't mean there's a sequel coming!
At least they didn't spend $300 million making and marketing this green garbage. Poor Warner Bros., what were they thinking wasting so much money on GREEN LANTERN or ANY superhero movie for that matter. That's way overbudget, even for a Superman flick...they should've been a tad more fiscally responsible (like a frugal $200 million) on what is obviously a B-level DC character. Only Nolan's Batman films might warrant such an exorbitant money (if that's really necessary).
In related news, this Box Office Mojo analysis of how the superhero flicks have jumped the shark this summer, drawing good but not great box office, is interesting... (I guess they're expecting DARK KNIGHT and IRON MAN-size hits every summer now...)
Posted by Greenblatt the Great! at 11:36 PM