MAN (FROM ATLANTIS), A Great BACK ISSUE MAG Article in the Works..... 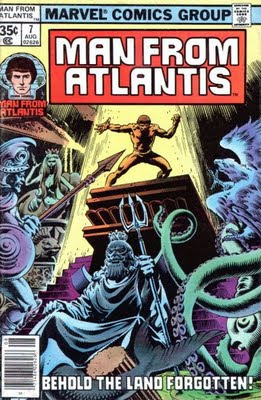 More from the Aquatic Superhero files: Normally, I don't like to crow about a BACK ISSUE MAGAZINE article that's in the works, but my article about the behind-the-scenes on Marvel Comics' MAN FROM ATLANTIS is going to be one of those epic stories.
MAN FROM ATLANTIS, written by Bill Mantlo and drawn and inked by Frank Robbins and Frank Springer, ran all of seven issues in 1978. The TV show was canceled somewhere in the middle of the comic's short run.
I've been able to get in touch with a plethora of crucial people from every angle of this adaptation of the MAN FROM ATLANTIS TV movies and the short-lived show on NBC, and it should be eye-opening, in the way that my pieces on two other licensed character books written by Mantlo -- THE HUMAN FLY (BACK ISSUE #20) and TEAM AMERICA (BACK ISSUE #41)---were.
The MAN FROM ATLANTIS article will appear in BACK ISSUE #55 around late 2011/early 2012.
Posted by Greenblatt the Great! at 8:11 AM

While everybody's jerking themselves a soda over Geoff John's Aquaman revamp, you're reeling in the big fish...The true story behind MAN FROM ATLANTIS! Any book written by Bill Mantlo and drawn by Frank Robbins is worth your time to investigate (like you did with your historic HUMAN FLY article).

There's nothing like a Mantlo/Robbins/Springer 1-2-3 knock-out. That's a winning combo, my friend! In that way, MAN FROM ATLANTIS comics were something of a treasure.

Too bad the three of them never worked on ROM together....or better yet, a Whiter Tiger series (still my favorite series that never happened!)

At least we got some Robbins White Tiger stuff in HUMAN FLY #8 and #9....Not to mention one of the most awesome villains ever: Copperhead!