I'll be the first one to admit that I had sub-zero expectations for X-MEN: FIRST CLASS, which turned out to be my favorite of all X-Men films by a long shot.
In a summer in which I feel that I dodged a $14 bullet seeing the lousy-looking THOR and I'm still on the fence about whether CAPTAIN AMERICA: FIRST AVENGER can live up to some monumental expectations based on decades of great comics going back to WWII, I was in no mood to see X-MEN: FIRST CLASS....especially after the bad quality of the last few Marvel movies, such as GHOST RIDER, IRON MAN 2, and, the worse of the worse, that last X-MEN flick, X-MEN ORIGINS: WOLVERINE.
All that said, X-MEN: FIRST CLASS was a terrific surprise and an odd Marvel movie at that: a period superhero film that was not so slavish to the original X-Men comics but captured the spirit of it and went beyond, giving some great back story to the characters of Magneto and Professor X. You really find out what turned Erik into Magneto and why Charles Xavier winds up wheelchair-bound in clever fashion that I don't think was explored in the comics (at least not the original books).
The casting is inspired: Michael Fassbender as Magneto is terrific, this will definitely be a breakout role for him, and all of the Magneto scenes are solid gold (In the process of telling his story, this movie turns out to be the best revenge-on-Nazis film since INGLOURIOUS BASTERDS!) 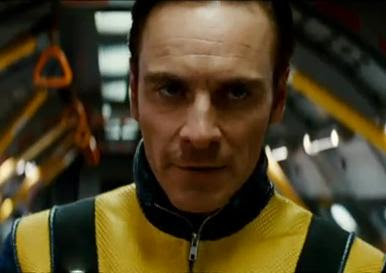 James MacAvoy as Prof. X seems like an odd choice at first but it totally works. Kevin Bacon also steals much of the movie. The other characters are well-cast, including Beast, Banshee, and some (I think) a couple of made-up (or recent) characters.
(I think this movie really benefits from not being directly connected to either the original X-MEN films or that whole Avengers Initiative crap dragging down the movies leading up to AVENGERS.)
Yeah, this movie is not slavish to the original Lee/Kirby cast of X-MEN (no Cyclops --although brother Havok appears---and no Iceman and Angel in this movie is not the same Angel from the book)....and yeah, I'd probably like it a degree more if it wasn't such a mish-mash of random characters and they had included all of the original X-Men... 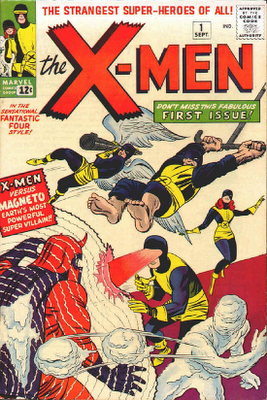 But this really fun and smart X-Men movie more than makes up for a few fanboy disappointments. What can I say? I wasn't looking forward to this movie very much, but the glorious reviews of my friends who saw it, coupled with my girlfriend Laura's desire to see it, got me into the theater...and I was not at all let down. Go see it if you're up for a good time and want to see the first truly inspired Marvel movie since 2008 or so.
Posted by Greenblatt the Great! at 9:26 PM

I'm looking forward to this one now. I have to say that THOR surprised me too.

I liked how they hinted at Magneto's past in the first movie. Admittedly, I'd be worried that by trying to explore that more thoroughly they would ruin some of the mystique surrounding the character (which is kind of necessary for a villain), but it sounds like they did a good job. Maybe I'll go see it.

Hey, Jamie, I'll catch up with THOR at some point. I never loved the character to begin with so I'm not totally hot for this movie. But for all I know, I'll be pleasantly surprised....

Not sure to what extent you enjoyed the X-MEN movies, but from someone who is NOT a diehard X-MEN fan (beyond the old Lee/Kirby stuff and the Claremont/Byrne run), I thought X2 was the best of the original three movies.... the first half of X-MEN was great followed by an unmemorable second half...I didn't think X-MEN 3 was as bad as people made it to be but it's not great. WOLVERINE was a total dog. That's how I'd rate them.

So far, Jamie, going by word of mouth, you, Rhode, Javier Hernandez and Ted Seko all gave THOR the thumbs up. I had one friend who disliked it intensely.

What's interesting, Jason, is that they use the concentration camp scene from the first X-MEN movie as a starting point for Magneto's story and the Magneto scenario makes for the most compelling part of the movie for me.

The characters chosen here are kind of random but they captured the flavor of the comics. And still no "official" Danger Room scene in this movie (but they walk up to the line of one).

Kevin Bacon's part in all of this is great, too, and should not be underestimated. He's got a kind of Nightcrawler doppelganger red devil guy who teleports.

You should definitely go see it, it's as entertaining as these Marvel movies get at their best. I had no idea who the two leads were, but they totally own their roles.

ha! That is so funny that JAVI gave THOR the thumbs up too. He was fighting VERY hard against going last time I spoke with him.

I am neither a big fan of THOR nor X-MEN so it puts me in a good position to be pleasantly surprised, I suppose.

But your endorsement of X-MEN is making me want to see it for sure.

Yeah, I was dead set against THOR but Rhode's comments about it drove me to see it and I ended up liking it!

And I also had zero interest in FIRST CLASS but saw it on a whim and BAM!! I became one of the film's biggest supporters! Ya never know....

The SPIDER-MAN reboot I WILL NOT SEE!!! No way, no how! No need for a reboot at this stage and worse, they ruined the Dikto costume!! A transgression beyond redemption, in my book!!