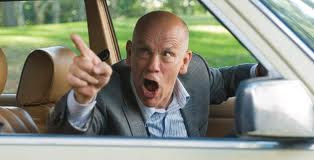 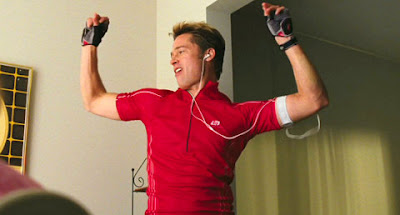 BURN AFTER READING (2008) ---- My buddy Rich suggests a better title woulda been "Burn After Viewing." I don't think this Coen Bros. movie is that bad. It's not one of their classics, like THE BIG LEBOWSKI or a great one, like HUDSUCKER PROXY, but it's not rock bottom like A SERIOUS MAN. I put this somewhere in the middle of their comedy-success scale, alongside INTOLERABLE CRUELTY. I enjoyed this movie from beginning to end, for the most part, the funniest performance being John Malkovich's (he also stole the show in ART SCHOOL CONFIDENTIAL a while back...). It's a cartoony movie, and Brad Pitt, Frances McDormand and George Clooney try their best to be ridiculous, with various degrees of success. Richard Jenkins, like the put-upon, alcoholic, memoir-losing Malkovich, also gives a winning performance as the manager of Hardbodies gym. A likable if imperfect gem.
GREENBERG (2010) ----- This one's a hard pill to swallow. A purposely aimless, rudderless "comedy" starring Ben Stiller. It smacks of a naturalistic indy flick like "Anniversary Party" (also co-written by Jennifer Jason Leigh). Anybody like "Squid and the Whale" that much to see a follow-up by Noah Baumbach? He co-wrote "The Life Aquatic" and "Fantastic Mr. Fox," both Wes Anderson films that I enjoyed. I just don't know about this one. The female characters are all insecure, neurotic and annoying. The British character doesn't belong in this movie. The folksy, nostalgic soundtrack makes my stomach queasy. The title is dangerously close to "Greenblatt the Great!" Which would've been a funnier film, right? RIGHT???!!!!
THE SPIRIT (2008) ---- The biggest problem with this film is that A) it's written and directed by Frank Miller and B) it bears no tribute or relation to Will Eisner's humorous noir superhero hybrid. Quite the opposite, this is Miller's tribute to himself. The movie aesthetically resembles Miller's SIN CITY movie, down to the closing credits, where there is not an Eisner drawing of The Spirit but instead, The Spirit drawn in Miller's style. I forgot C) This movie has some of the worst dialogue I've heard in a movie in many years. (Well, one good thing came out of this movie: it was such a failure, they took back the BUCK ROGERS project from him.)
Somewhere lost in the mix is Will Eisner and his quirks. Too bad. Another lost opportunity: the opening of the movie could have opened with the title of the movie in Eisner-style giant stone letters and the Spirit running around it. That would seem to be a no-brainer. Given there were no brains behind this movie, it's a surprise they didn't think of such an obvious reference to the comics. Guess that was never Miller's intention.
Posted by Greenblatt the Great! at 12:34 AM