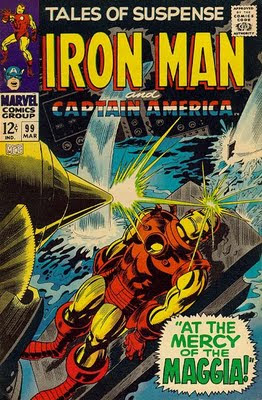 The first comic I ever read had a Stan Lee/Gene Colan Iron Man as a back up feature (behind a Lee/Kirby Captain America story). It was a tale in which Iron Man battled the Growing Man.
I'll never forget how alien and otherworldly his tall, elegant, looming Iron Man was. He drew Iron Man to perfection. That iconic cover for the Invincible Iron Man #1 underscores how he owned that character (among many others). 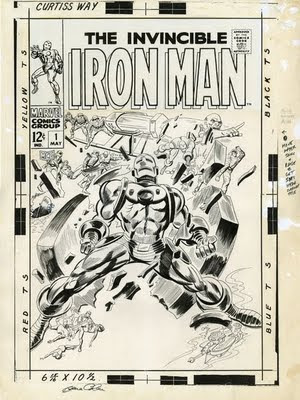 Years later, I got to know his work on Tomb of Dracula, Son of Satan, Howard the Duck...and I got to interview him by phone for an article on Captain America and Falcon in Back Issue #22. I'm glad I had the chance to hear some of his stories working for Marvel.
I loved his run on Brother Voodoo in Strange Tales. His art was always beautifully atmospheric. 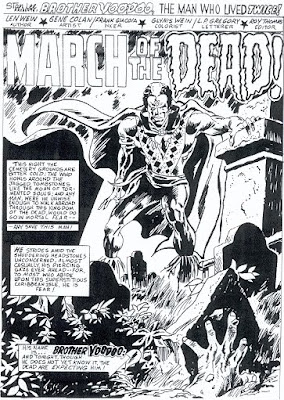 We just lost a giant in the field and the game will never be the same again knowing Gene the Dean is no longer among us.
Posted by Greenblatt the Great! at 12:05 AM

Such a huge body of work produced by Gene Colan. And all of it in his uniquely virtuoso style. How lucky we were to have experienced his great artwork.

I know Colan was as big an influence on my work as he was on yours (even if it's not obvious on the surface). He was the engine and the spirit of the '60s and '70s Marvel we grew up on.

I think as an adult, I came to appreciate his art even more as I picked up Tomb of Dracula, Son of Satan, Brother Voodoo and other Colan works that I did not pick up much as a kid because they were not straight-forward superhero stuff.

I owe a thanks to the Cartoon Art Museum for their dynamic Colan exhibit in March 2009 during Wonder Con. So glad I got to see those pencils up close. He will be missed...