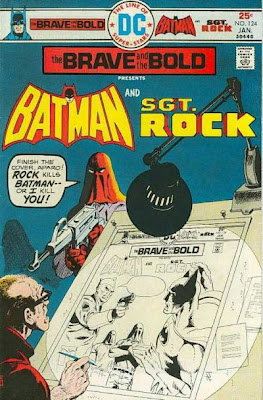 How can you not dig a cover like the one above by Jim Aparo? Priceless!

I have to admit that while collecting Marvel and DC Comics as a kid, I didn't get Jim Aparo's art at all. I did not like his take on Batman and the Joker (and still have a bit of a hard time with his super-exaggerated caricature-looking versions of those characters....as if they were drawn by a mall artist ["So...what's your favorite sport?"]).

But tastes can change, develop, mature and simplify. I know that I'm not the only comic book reader who rejected the art of Jack Kirby and Steve Ditko during pubescence. Which, in hindsight, makes a lot of sense. When you're that tender age, and you're impressed by guys who can draw "realistically" (like Neal Adams and Bill Sienkiewicz). And, on top of it, you're an aspiring artist, your goal is to improve your drawing chops. So you really look up to the photorealistic types and dismiss the stylists.

But it's when you're an adult that you realize that the stylists are the artists with true individuality, invention...you know, soul, brother! Then guess what? Photo-realistic artists in the vein of Alex Ross and Adam Hughes...their art looks cheesy, static, and even worse...dead and soulless (although I still dig Adams when he's at the top of his game). Then it's welcome back, Jack! Hello, Ditko! And guess what, folks? They're back to stay!

So, during my childhood, Aparo was not at the top of my list. I never read his AQUAMAN and SPECTRE stuff and his BRAVE & THE BOLD work left me cold. I thought he was the biggest hack in a house full of hacks (DC Comics).

Lo and behold, this character dragged me into the Jim Aparo fan cult about three years ago. 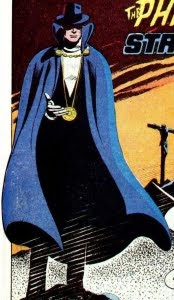 I really dug Aparo's incredible compositions, Dutch angles, and storytelling. The way he broke up the panels. The mood he set in that "Twilight Zone"-ish, supernatural book. Just great moody stuff. 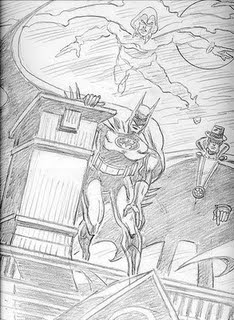 Not to mention the fun, pulpy and gloriously repetitive and redundant stories. Stuff pitting the debunker Dr. Thirteen (whom I wrote about in the current BACK ISSUE! # 36) against the Stranger. The Neal Adams covers didn't hurt. PHANTOM STRANGER is probably my favorite Bronze Age DC Comic these days, along with THE UNKNOWN SOLDIER. 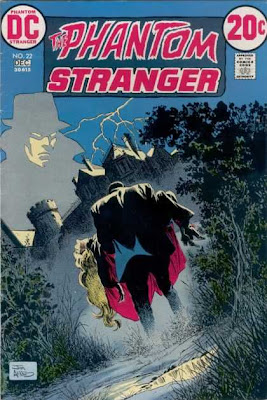 I have to admit that Jim Aparo is still not my favorite artist. Probably not even in my top 10. But I really appreciate his work much, much more. Like my main man Tony DeZuniga, I think he has the most fun when he's riffing on the supernatural....non-superhero stuff.

I still have yet to take the Aparo plunge, but yeah, there are some things the man does in his storytelling that really warrants my attention.

That's interesting to read about your earlier aversion to Kirby and Ditko, in regards to aspiring to improve your own drawing skills. You think you know a guy... :)

I see what you mean about striving to emulate the 'realists', but for myself, I really was always attracted to the artist's whose style seemed to be one-of-a-kind. Realism is for Life. Lord knows I get enough reality clobbered on my head every day!

Regarding Mr. Aparo, I should probably take the plunge and pick up that Phantom Stranger SHOWCASE. Aquaman, no matter who draws him, will never be my cup of salt water!

And I have to agree with you that the BRAVE AND THE BOLD cover, with the petty villian forcing Aparo to bump off Batman, is priceless!

I highly recommend PHANTOM STRANGER, Vols. 1 (which has Aparo and DeZuniga art) and 2 (which has Gerry Talaoc art). Both are gems.

I also highly recommend UNKNOWN SOLDIER, ditto for Talaoc. If you enjoy Frank Robbins' art, you'll really dig Talaoc. He's an awesome twist on Robbins. Talaoc's US is even more fun than the original Kubrick work.

I agree, Aquaman is a hard sell, no matter who handles it. It's a lame character. Kind of like reading the solo adventures of Robin the Boy Wonder. Who gives a s*@t!

That's the best part of this Aparo cover: you're right, the villain is so petty, a complete unknown. But he should have become a superstar supervillain after pulling this weird fourth wall-breaking stunt!