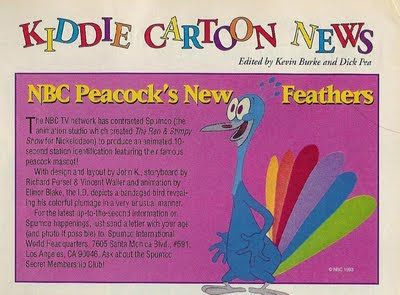 It's easy to blame recently departed exec Ben Silverman for NBC's new acronym meaning, which is the "No Body Cares" network. But it's easier to forget that this network was doing stupid all by itself long before they hired Silverman. True, Silverman came up with uninspired remakes of KNIGHT RIDER, BIONIC WOMAN and AMERICAN GLADIATORS, but to his credit, as a producer, created their best written and acted sitcom (THE OFFICE, not 30 ROCK, which actually just got the Emmy for its worst season). Not to mention he brought UGLY BETTER to America at ABC.

I'm guessing that the exec with initials that sound like the nation's current # 1 rapper (as in BLUEPRINT 3) is the real numbskull at the No Body Cares network.

Behold! The long-in-the-works dismantling of THE TONIGHT SHOW. Which network jackass decided to demote Jay Leno, the only guy who was beating Letterman in the ratings, in favor of Conan, only to stick Leno in the 10-11 PM hour five days a week and screw a bunch of scripted show talent out of taking that air time?

My money's always been on Letterman. Even though I hardly watch any late night shows anymore, Letterman's the only truly talented and funny guy working late night, in my opinion. He's the only one who makes me laugh and the 1980s Letterman show was a big influence on me when I was in h.s. Leno has never met a joke he didn't kill with obviousness and mediocrity, Conan gets tedious and tiring, Jimmy is an unfunny slob, the other guys are too peripheral to remember or keep track of.

No matter how you sliced it, the whole thing was asinine. I could care less about Leno, but as he was the ratings king, why would you shoo him out to drag in the untested Conan, giving Leno the chance to fly the coop and go to another network and compete against Conan. So in order NOT to lose Leno, NBC had to pay handsomely no doubt just to retain him!

On a side note, THE OFFICE amazingly gets better and better with each season, particularly with seasons 4 and 5 (which was just robbed of the awards it deserves, as 30 ROCK's quality has gone down the tubes). Season 6 of THE OFFICE has slipped a little...I haven't enjoyed episodes 2 and 3 as much as the great season premiere, but I'm sure it'll right itself as the season progresses. (And if not, perhaps it'll get the Emmy for Best Comedy next year). Let's hope NBC doesn't get in the way and screw this show up!

Speaking of THE OFFICE, B.J. Novak has a role in INGLOURIOUS BASTERDS, which I just saw today. My review is forthcoming in my next post.......
Posted by Greenblatt the Great! at 7:43 PM