After AFTER CON, Comma COMIC-CON! 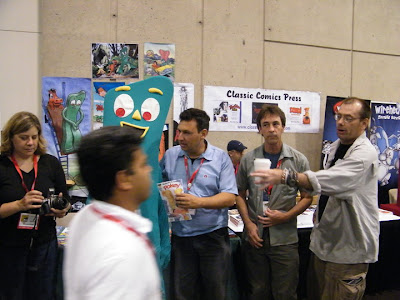 Not to be outdone by the Three Stooges, Team Gumby stages some real live "antics" on the San Diego Comic-Con floor.
That's Mrs. Joe Clokey on the far left, their tech support guy from Atlanta in the foreground, Gumby; myself holding a rapidly depreciating mint-to-very-good copy of the GUMBY'S GANG STARRING POKEY comic; the book's colorist, Lance Borde; and the book's publisher, Mel Smith. Man, what a fun table we ran! If SD Comic-Con 2010 were a reality star, it'd be Kim Kardashian. Top shelf! 07/23/10
The guy in the black cap in the background was our lovable neighbor, who may have once lived inside a trash can on Sesame Street. A real people person, this guy. He was so committed to selling his wares, he went M.I.A. for most of the convention. (No surprise his table was rarely visited.) He only surfaced long enough to gripe about us laying stuff on his unused table. At one point, he dramatically threw down a pamphlet in frustration with us. And yet, he was gone for most of each day and his table sat there in neglect. Go figure!  (One handwritten note, scribbled on a lined sheet of paper, famously promised that he would "Be Back at 4:30 p.m." ---- hey, it's not like they were lining up at his table!). 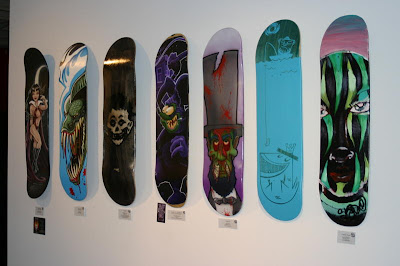 From 7/22/2010, here's another gallery plane at the AFTER CON art opening. Lots of skateboard art and references to Vampirella and the Heath Ledger Joker made it into the show. This wall seems to have it all!
Posted by Greenblatt the Great! at 5:15 AM