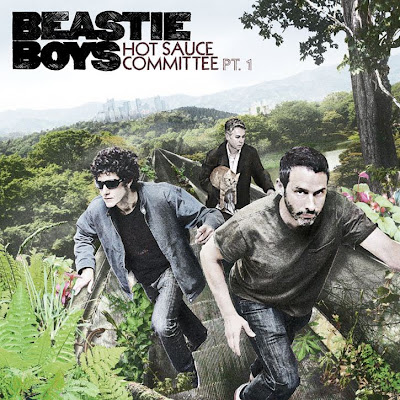 HOT SAUCE COMMITTEE, PART I, the first Beastie Boys album since 2004's TO THE FIVE BOROUGHS, was supposed to drop in September 2009....but was held back after MCA's medical scare.
A release date for this album has yet to be announced, but these tracks have leaked online: TOO MANY RAPPERS, POP YOUR BALLOON, HERE'S A LITTLE SOMETHIN' FOR YA, and LEE MAJORS COME AGAIN.
The verdict: I'm digging the weird, Egyptian synthed-out, jungle-beat "Pop Your Balloon" the best out of these four....It's a fun romp and it sounds like they're having fun performing.
"Lee Majors" may have the most promising title, but the song is a throwback to the '90s rap/punk amalgams for "Check Your Head" and "Ill Communication" which are kind of hit or miss. This one seems more miss upon first listen, but it also sounds like a track that might grow on me a little.
Another "Ill Communication" reminder, "Too Many Rappers" (which was supposed to be this album's lead single) re-pairs the Beasties with Q-Tip and that's always fun. This track is okay if not as good as "Get It Together." As a lead single, it's no "Check It Out" or "Intergalactic" so  this may not bode well for the entire HOT SAUCE album.
"Here's a Little Somethin'" is the Beasties on autopilot. This is what they sound like when they're at their most generic, like on a couple of the last few tracks on the otherwise fun TO THE FIVE BOROUGHS. If it's not too late, they should shove this one back into the vault before HOT SAUCE is released.
I will always be interested in the latest Beastie Boys album, even if over the years they've become more preachy and politically correct and will never deliver the subversive thrills of a LICENSED TO ILL or PAUL'S BOUTIQUE again. However, looking at the HOT SAUCE COMMITTEE track list, songs with titles such as "Multilateral Nuclear Disarmament" kind of make me go "Uh, oh...."
Posted by Greenblatt the Great! at 5:27 PM