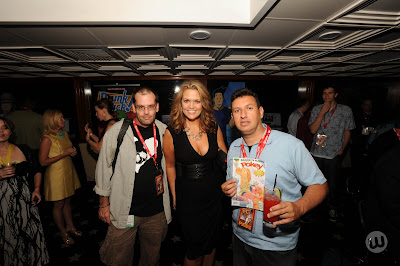 On Friday, July 23, 2010, Gumby Comics publisher Mel Smith (left) and myself arrived at the Wowio Yachty Party with colorist Lance Borde after the convention with freshly pressed copies of GUMBY'S GANG STARRING POKEY. That's not Lance in the middle (although no one is arguing he wouldn't look smashing in a little black cocktail number), it's Arriane Alexander, a Wowio affiliate who helped out with the event.
Wowio.com carries the digital download versions of my comic books (see my Wowio.com home page) and their execs are the coolest. My rep, Kristin Ellison, and Kelly Lind, the marketing coordinator, are a fun bunch from Boston. It was terrific meeting them in person at the yacht party and thankfully, the boat didn't sink that night (confession: I cheated on my diet that week).
In addition to the food, booze and good company, a couple of live bands and some fireworks capped off the evening at San Diego Bay.
Fun times!
Posted by Greenblatt the Great! at 6:50 PM